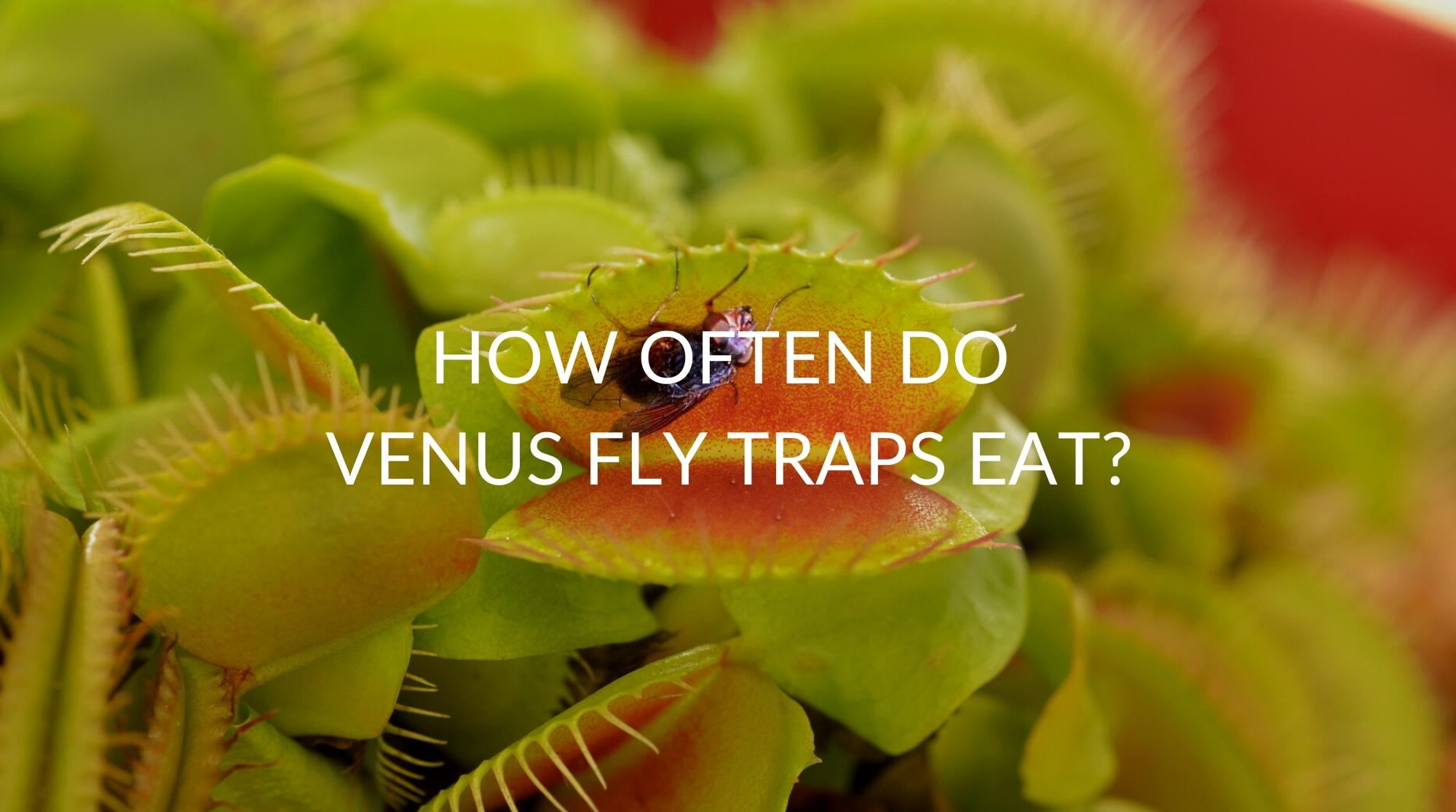 When people hear the word carnivorous plants, the Venus flytrap is easily the first thing that comes to mind. This classic plant is known for its vicious claw-like snap traps capable of consuming live insects. Among the most commonly asked questions about Venus flytrap care are related to their feeding routines. As a loving plant owner, it is crucial to know how often they eat, and whether they should be fed at all to begin with.

So, in this article, we will discuss how often you should feed your Venus flytrap, and read on tips about some feeding do’s and dont’s.

Can You Overfeed A Venus Fly Trap?

Because Venus Flytraps are popularly known as carnivorous plants, many are wondering as to how much they can eat; or whether it is possible to overfeed them. And as a loving plant owner, you might say. “the more insects they consume, the better, right?” Well, as it turns out, this is not the case for Venus Flytraps.

The answer to whether Venus Flytraps can get overfed varies, depending on two major factors; whether they are grown indoors or outdoors.

If you take care of your Venus flytrap indoors, however, their eating behavior changes. As it gets more difficult for these plants to catch their prey in rooms with a limited number of roaming insects, they may need help from humans to get sufficient nutrients. You may need to manually feed your Venus flytrap live or dead insects.

If you wonder whether it’s possible to overfeed these plants when grown indoors, the answer is yes. Just like any living creature consuming food, Venus flytraps can either get overfed or underfed. Giving your plant too much food can do more harm than good. Force-feeding your plant’s traps simultaneously or giving it an insect that’s too big drains much of its energy for digestion. This can result in the death of the traps’ early death.

And according to an article by New York Botanical Garden, overfeeding your Venus flytrap can actually kill your plant.

If placed inside the house, feeding your plant once every other week is more than enough to keep it happy and healthy.

If you are growing your Venus Flytrap indoors, you can give it food once every two to six weeks to help it thrive. It is important to remember that this means feeding one, not giving insects to all their traps simultaneously. As mentioned above, overfeeding your plant is possible, and it usually results in either a shortened lifespan of the traps or even killing your plant.

It’s important to understand why they consume insects. Although they look like aliens from another dimension, these plants are actually native to the small eastern regions of North and South Carolina, where they originally grow in marshy, acidic soil that is poor in nutrients necessary for them to thrive. Because of this, they have adapted to their environment in order to survive.

So, aside from the most common way for plants to process their own food through photosynthesis, they trap and consume insects to compensate for the lack of nutrients in the soil they are originally in.

Venus flytraps catch their prey using their snap traps; Yes, those fang-like filled hinged lobes that are connected to their leaves. By secreting sweet nectar with a fruit scent designed to attract nearby roaming insects, the waiting game begins. Once an insect or a small bug lands into the trap, the dedicated trigger or sensory hairs would get stimulated, sending signals to the trap. This would result in a split-second shutting of the trap, successfully capturing the prey.

If you feel like this whole prey-catching activity sounds tiring, it’s because it really is. Well, at least for the plant. When something gets into the snap traps, whether prey for consumption, or inanimate objects like small rocks or fallen leaves, it can completely shut the traps. The whole process of snapping, capturing, and digestion of prey can take up so much of your Venus Flytrap’s energy.

Therefore, it is important to feed them only when it is necessary.

How Long Can A Venus Flytrap Go Without Eating?

Another thing to consider regarding feeding your Venus flytrap is how long it can last without food. Generally speaking, Venus flytraps can last for a month or two without eating, and when planted outdoors, they don’t require any feeding at all as they catch their own prey. They only need to be fed once a week or once every two weeks.

But during winter, their need for food definitely changes. This season is considered their dormant season. For about two to three months, you will notice that most of your Venus flytraps’ leaves will drop, and their smaller traps will shrink and become unresponsive. In fact, they may look dead, which can be alarming to many plant owners! But don’t worry; this dormancy is just a healthy part of their growth cycle.

During winter, there’s no need to feed your Venus flytraps manually. They have adapted not to waste energy in winter because there’s very limited prey to catch in those months. So, when you feel the urge to feed your plant in its dormancy, bear in mind that it can actually become harmful for them as it can cause them additional stress. Also, Venus flytraps are completely capable of catching their own prey, so it is most likely that they would just do that once they need the extra nutrients.

What To Feed A Venus Flytrap

When manually feeding your Venus flytrap, you may give them live or dead insects such as:

These are just some of the examples, but they are not limited to them as their surroundings can be filled with many different types of small prey. Just remember that Venus flytraps cannot consume insects bigger than 1/3 of their trap’s size. Giving your plant insects bigger than what they can consume can lead to trap rot, which makes them turn black, leading to their early death.

What Not To Feed A Venus Flytrap

Despite being classified as carnivorous plants, venus flytraps should never be given fresh meat that humans normally consume, or even cooked meat. Under no circumstances you should ever feed your plant human food, and yes, we’re talking about that juicy hamburger you’re having for dinner. No matter how delicious they may be for us, these meals will not provide the appropriate nutrients for your Venus flytraps, and can even harm them.

As mentioned above, you should also avoid giving your Venus flytraps insects that are bigger than their traps to avoid early trap death, as well as insects that are too small or too tricky to eat, such as ants, or caterpillars. These insects can either eat their way out, or simply crawl past their your plant’s traps.

Venus flytraps are not high-maintenance plants, but taking care of them requires proper knowledge about the do’s and dont’s, especially when it comes to feeding. When giving food to your Venus flytrap indoors, remember not to overfeed them, refrain from giving them food during their dormancy food, and to NEVER give them human food. Instead, give them food, such as live or dead insects once every two weeks.

Just like humans, with proper feeding and nutrition, you can ensure that your Venus flytrap will thrive!