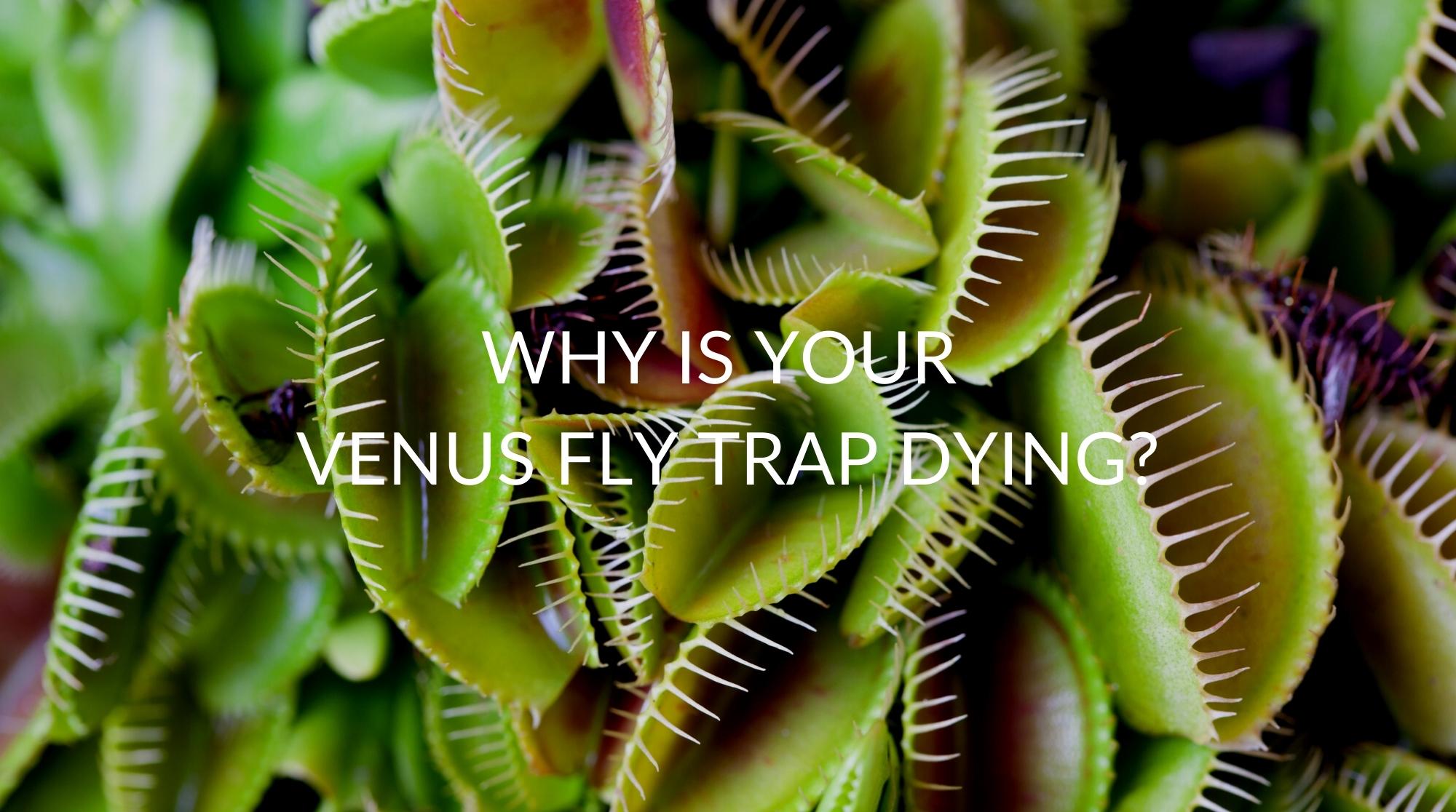 Surprisingly, Venus flytraps require a cold winter hibernation to live long-term. It’s natural for some traps to turn black and die when the daylight hours shorten and temperatures drop as your plant enters its winter resting period. However, Venus flytraps can be fussy plants. Check the soil quality, the plant for sickness, and more if you fear your Venus flytrap is dying for other reasons.

Continue reading to learn why your Venus flytrap could be dying, how to discern the difference between dormancy and death, and how to preserve a dying Venus flytrap.

What Is a Venus Fly Trap?

The Venus flytrap is a carnivorous plant endemic to the subtropical marshes of North and South Carolina on the United States East Coast. It traps its prey, primarily insects and arachnids, using a trapping device made by the terminal region of each plant’s leaves and activated by small hairs on their inner surfaces.

When an insect passes through a Venus flytrap’s leaves, it comes into contact with small hair. These hairs prepare the trap to close, snapping shut if another trigger occurs within twenty seconds of the first strike. Triggers can happen as soon as a tenth of a second after contact.

Why Is Your Venus Fly Trap Dying?

You May Be Feeding Your Venus Fly Trap the Inappropriate Food

The Venus flytrap gets most of its nutrition from the ground, but it can also eat spiders and insects to supplement its diet. Ants, grasshoppers, flying insects, and spiders are all killed by the flytrap. A Venus flytrap can digest a creature in three to five days and can survive for months without feeding.

If you feed your plant bugs, don’t give them anything bigger than a third of the size of the trap. If the bug is too large, or if a stray leg or antennae is left peeking out, the trap will most likely be unable to shut, causing the leaf to die.

Your Venus Flytrap Is Hibernating for The Winter

Venus flytraps require a cold winter dormancy to survive. When the daylight hours shorten, and temperatures drop as your plant enters its winter resting period, it’s common for some traps to turn black and die. In the northern hemisphere, this period normally lasts from November through February.

You’re Feeding Your Venus Fly Trap Too Much

It takes energy to close a trap and consume an insect. If you feed every trap on your plant or set the traps for no reason other than to have fun, some of your Venus flytraps leaves will most certainly turn black and die.

Don’t be concerned since this is unlikely to be fatal. Your plant is just devoting its resources to the growth of new leaves. Wait a month or two before feeding again and try not to feed more than one trap every week in the future. Instead, put your plant outside on a bright day to see if it can catch any food on its own.

Your Venus Flytrap Is Simply Going Through Its Natural Life Cycle

Suppose the oldest traps in your Venus flytraps rosette are blackening, or the blackening trap has already captured and digested multiple insects. In that case, this is most likely a typical component of the trap’s lifespan. If your plant continues to produce new growth to replace the old traps, you should be fine.

When your Venus flytrap appears to become black and expires swiftly, you know it’s dead. The whole plant develops a sickening black color, and all that’s left is a mushy mess. If you freeze a piece of lettuce and then defrost it, it will resemble a Venus flytrap that is about to die. The critical thing to remember is that death will come soon if you don’t take immediate action.

If you see white mold growing in your Venus Flytrap, it could be a sign of something else.

Is My Venus Flytrap Dead or Dormant?

Dormancy is a whole distinct process that takes significantly longer to accomplish. The leaves will turn black and appear to be dead, although this will take several weeks. It’s also worth noting that when a Venus flytrap goes dormant, it usually keeps part of its green leaves.

Keep your eyes peeled for any green. If your Venus flytrap has become green, dormancy may have been initiated. The best thing you can do is wait it out unless the plant is visibly dead.

How To Care for A Dying Venus Flytrap?

Venus flytraps thrive in poor soil in the wild. They’ve acquired intolerance to certain nutrients over time. As a result,regular soil is not suitable for Venus flytraps.

You’ll need to repot right away if you’re using regular soil with minerals and fertilizers. Standard dirt will rapidly destroy your Venus flytrap. You may buy or build your own nutrient-free carnivorous plant mix for your Venus flytrap with moss, plus a draining agent.

Venus flytraps are picky about the type of water they may use. Never use tap or bottled water to water your plant. Instead, you’ll need mineral-free, nutrient-free water. You may choose between distilled, reverse osmosis, or rainwater.

You’ll have to make a few adjustments if you use the wrong water source. To begin, repot your plant in new soil and hydrate it using the proper water source. Then, just use nutrient-free water to water your plants. Before using it, check the water tag to make sure it doesn’t have any fertilizer added.

Stick To a Watering Schedule

Venus flytraps prefer humid environments since they are accustomed to wet soils and humid conditions. Some people assume that Venus flytraps dwell in swamps; however, this is not the case. When watering Venus flytrap, make sure the solid stays damp. You should not, however, flood the earth with water. Excessive watering can harm your plant and provide an ideal habitat for mold and germs to thrive.

Look for your Venus flytrap in the dirt. With one of your fingers, check for dampness. If the ground is wet, wait until it is practically dry before watering again. This time, though, merely water until the soil is moist. The ideal technique is to establish a watering routine that you can change as the seasons change.

Examine your present lighting conditions and adjust your setup such that your Venus flytrap has at least 4 hours of light every day. A plant light may always be used to augment natural sunshine. I’ve had no problems with high-output fluorescent lights and high-power LED plant lights. If you’re unsure about the lighting, it’s best to give your plant more light than less.

Improper illumination will not immediately harm your plant, but it certainly weakens it over time. Your plant’s color is fading due to a lack of light. Healthy Venus flytraps are brilliant green outside of their traps, while within their traps are deep red.

Check For Pests and Root Rot on Your Venus Flytrap

Examine your Venus flytrap for signs of disease, identify the symptoms, and look for cures. Aphids, for example, cause twisted and malformed leaves of Venus flytraps. Pyrethrin pesticides can be used to get rid of aphids. Your plant may also be afflicted by mites, fungus, mold, and other pests. Identify your plant’s symptoms and look for treatments.

Should You Cut Off Dying Venus Flytraps?

You may either leave the dead leaf on the plant or remove it. If dead leaves are left alone, they will decompose naturally. Mold can form on these leaves and spread to the rest of the plant, inflicting harm or even death; however, this occurs only when the plant is already dying.

Simply remove the dead areas when pruning a Venus flytrap’s partially dead leaves. However, do not cut into live, green tissue. If you get good at cultivating carnivorous plants and have an extensive collection, you’ll probably just remove dead leaves at the end of the season or before showing it off to possible love partners.

Why Do Venus Flytraps Die So Easily?

Check your feeding habits and growth circumstances if the traps on your Venus flytrap turn black much sooner than they should or if numerous traps die at once. However, the plant can be saved if the issue is resolved.

Many people mistakenly believe that a drooping Venus flytrap is sick, and they overcompensate with nutrients or water, destroying the plant. Similarly, it’s essential to remove the plant’s plastic covering and ensure that the space it’s in has a good level of ambient humidity.

Venus flytraps are strange plants that appreciate strange things and behave considerably differently than their non-carnivorous counterparts, and as a result, they are frequently misinterpreted. However, with simple care, understanding what to look for, and assuring a steady supply of live bugs, Venus flytrap maintenance should be a snap.