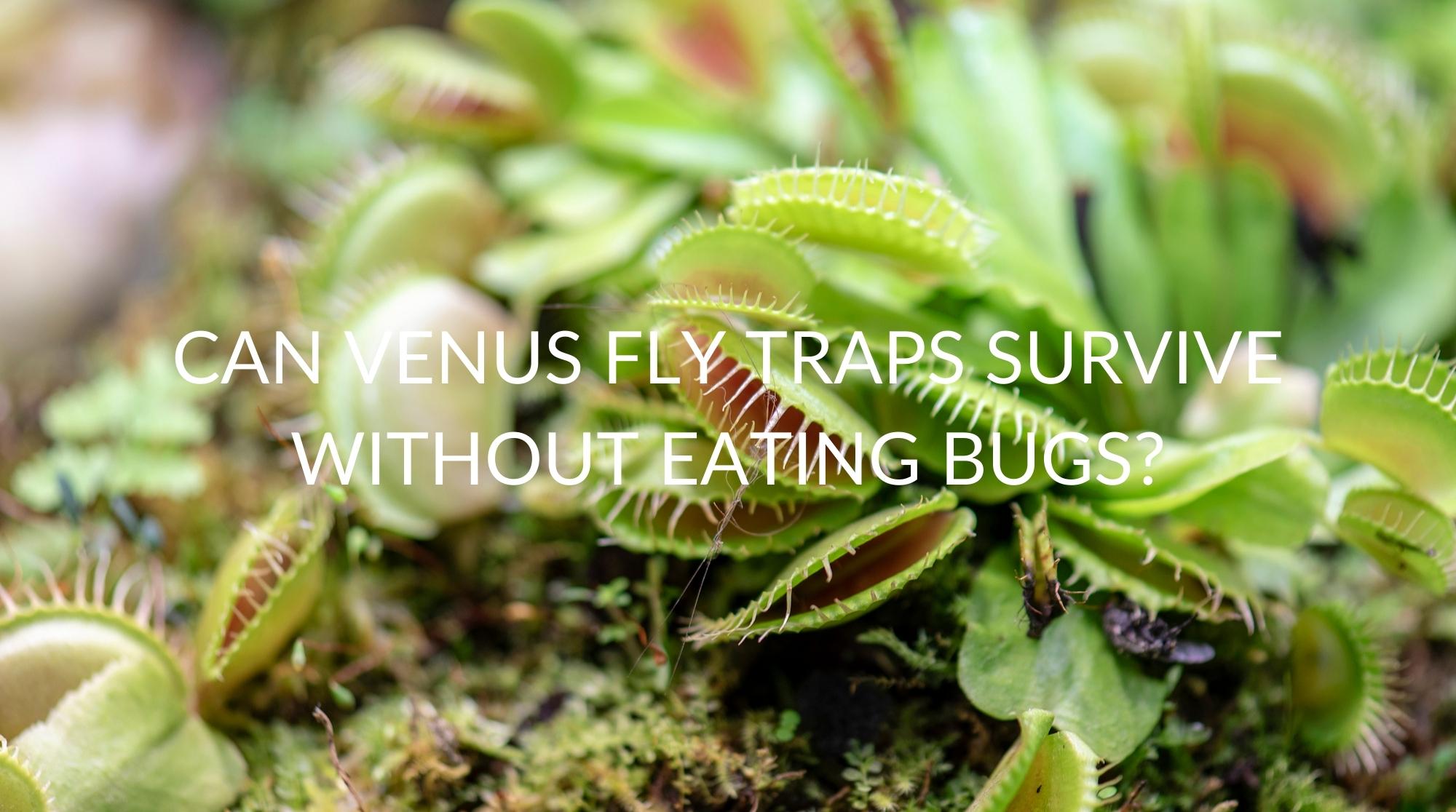 The Venus flytrap has a notorious reputation as a carnivorous plant, but it does not necessarily have to eat bugs to survive. Wild Venus flytraps often grow in areas where the soil is lacking in nutrients and have adapted to eating bugs to enrich their diet, but Venus Flytraps grown in captivity can survive off photosynthesis alone if they are kept in the right environment.

The rest of this article will go into detail about the dietary needs of the Venus Flytrap. Continue reading to learn how you can successfully keep your Venus flytrap alive without ever feeding it a single insect.

What Happens if a Venus Flytrap Doesn’t Eat?

If a Venus Flytrap doesn’t eat bugs, it will most likely not die, but having no access to insects may affect its overall health if it is unable to get enough nutrients from the soil and sunlight alone. Without this boost to their diet, the Venus flytrap will develop more slowly and experience stunted growth.

Because the soil in the Venus flytrap’s natural habitat is acidic, this plant relies on catching and digesting bugs as a valuable source of phosphorous and nitrogen. Eating insects is especially beneficial for the development of the Venus flytrap’s rhizomes, which are horizontal underground stems used for storing proteins and starches. If a Venus flytrap grown in captivity is given special care, it will not be as dependent on eating bugs as its natural counterparts.

Venus Flytraps can survive without eating bugs, both in captivity and in the wild. Like all plants, the Venus Flytrap creates its own food through the process of photosynthesis, surviving off the water, sunlight, and carbon dioxide harvested from the air and soil. Unlike carnivorous animals, carnivorous plants do not actually need to eat meat to gain energy and carbon but eat insects for the sole purpose of replenishing certain nutrients.

If you are growing a Venus flytrap outdoors, it will naturally catch and consume prey and will not require any human intervention to grow and thrive. If you keep a Venus flytrap indoors, it will still likely manage to catch some bugs on its own, and hand feeding it the occasional insect will help encourage its development. Live grasshoppers, crickets, ants, and spiders are all good options as long as they fit inside the plant’s trap, and you can feed the Venus flytrap by dropping the insect directly into the trap, between the trigger hairs.

Wondering whether Venus Flytraps are poisonous to cats?

If you choose not to feed bugs to your indoor Venus flytrap, take heart that your plant will be fine as long as you take the proper steps to ensure its health.

How Long Can Venus Flytraps Go Without Eating?

A Venus flytrap will often go a month or two at a time without eating any bugs, and after consuming an insect, it takes between three and five days for the plant to digest it. Some Venus Flytraps will go their whole lives without ever consuming prey. Each plant grows several traps over the course of its lifetime, which lures in bugs by producing sweet-swelling nectar. The trigger hairs along the edges of the trap sense when an organism has landed, and prompts the trap to snap shut.

Each trap on the Venus flytrap can only catch about 3 or 4 bugs in total before it closes and falls off, and when one trap is lost, another will eventually grow in its place. Because of this feature of its evolution, the Venus flytrap is not considered to be a very prolific hunter compared to other carnivorous plants.

What Can I Feed My Venus Flytrap Without Bugs?

If you are not feeding your Venus Flytrap bugs, it’s important to make sure your plant is able to sustain itself through photosynthesis. Access to sunlight, water, and the correct kind of soil are essential. Below are some tips for keeping your indoor Venus flytrap fed and healthy.

1. Give Your Venus Flytrap Proper Exposure to Sunlight.

For the best results, you should provide your Venus flytrap with plentiful but indirect exposure to sunlight because placing them directly in the sun can cause them to become overheated and can kill their leaves. It is fine to grow a Venus flytrap under artificial light as long as you keep your plant 4 to 7 inches from the light at all times.

2. Give Your Venus Flytrap Enough Water.

Venus flytraps can only thrive in moist conditions, so you should keep its pot in standing water and never allow the soil to dry out. The flytrap needs water devoid of minerals, so consider using rainwater or distilled water to keep your plant in optimal shape.

3. Make Sure Your Venus Flytrap Is Growing in the Right Kind of Soil.

The best kind of soil for planting a Venus flytrap is a mixture made of equal parts perlite and peat moss. Avoid using traditional potting soil, as this can actually harm your plant. The ideal container for a fully grown flytrap must be at least 6 inches deep and 4 inches wide, and the plant will die if not given enough room to grow.

4. Let Your Venus Flytrap Hunt on Its Own.

If you do not want to feed your Venus flytrap directly, consider letting your plant spend some time outside so it can catch prey by itself. When kept inside, your Venus flytrap can actually provide valuable pest control if given a chance to capture flies, spiders,  and other invasive insects and arachnids.

5. Be Aware of What Not to Feed Your Venus Flytrap.

Outside of bugs, you should not feed anything directly to your flytrap. Although the plant is carnivorous, it is not adapted to eat other types of meat, so never give your  Venus flytrap any kind of human food. Additionally, your plant should never be given fertilizer, compost, or any type of chemical solution meant to encourage growth because all these substances are toxic to Venus flytraps.