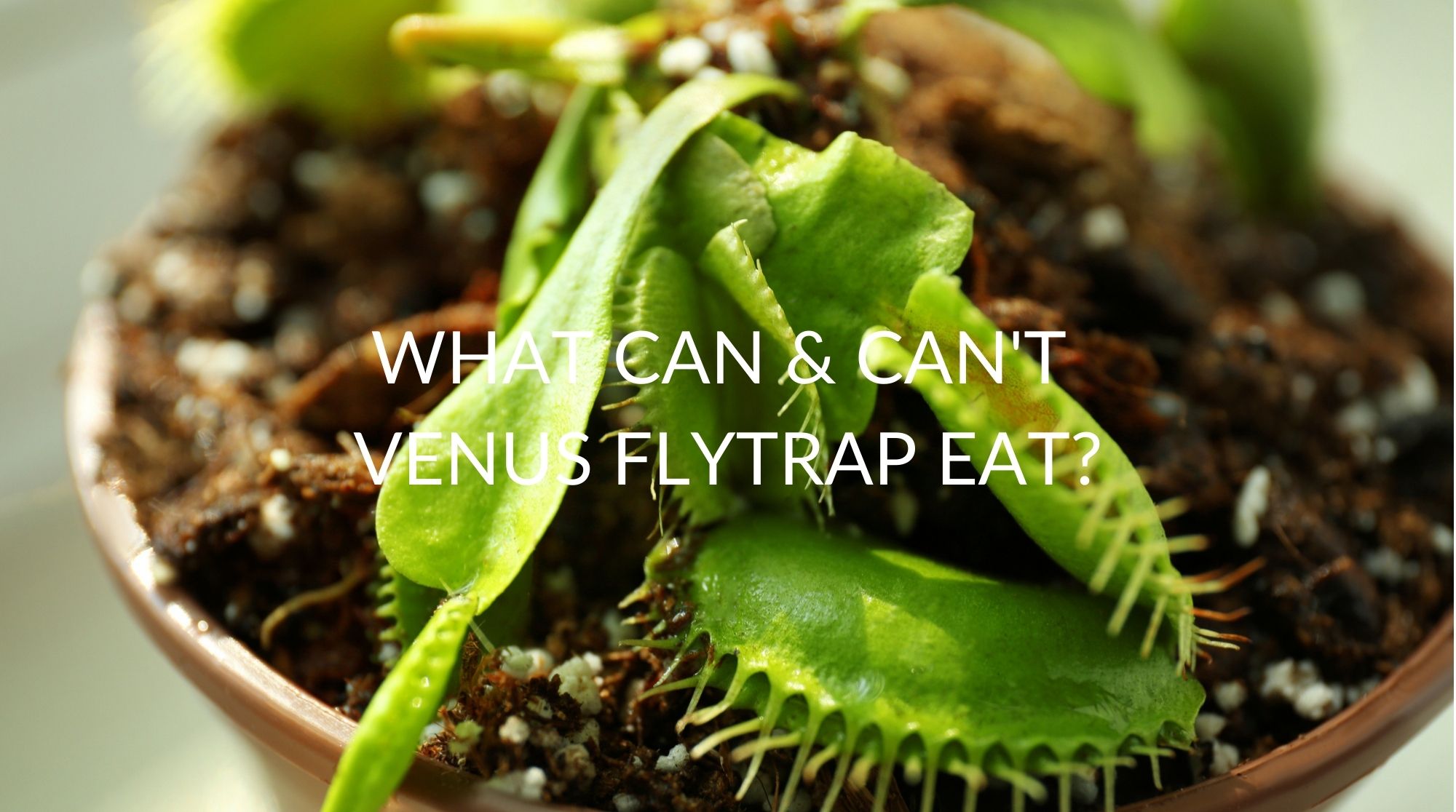 Caring for a Venus Flytrap is not like anything you would do for regular gardening. They don’t need fertilizer like a typical plant, and they require a different kind of diet. So, knowing what can and can’t Venus Flytraps eat will be an essential part of keeping them healthy and vibrant.

They love to eat things like worms, mosquitoes, fruit flies, and other similar morsels. While Venus Flytraps can have things like caterpillars and slugs, they could be too strong and cause severe damage to the plant. Also, avoid human foods or actual meat; these aren’t advisable.

Just because a Venus Flytrap is carnivorous doesn’t mean they’re “meat-eaters” like humans or animals. “Carnivorous” in this way only refers to how they consume live protein in their daily diet.

What Can I Feed My Venus Flytrap?

You can feed your Venus Flytrap a host of different bugs, insects, and crawling things. However, you have to judge the size of the food compared to the age of the plant. If the critter is bigger than the trap, it will have difficulty digesting the morsel. This can result in blackened leaves or other damage.

Always make sure that the food you give a Venus Flytrap is about ⅓ the size of its trap size or less. This will make it easier for the plant to digest, and it won’t spend too much energy trying to consume it.

Also, understand that food for a Venus Flytrap is about more than just nutrition. A study published in Science Daily indicates Venus Flytraps derive typical nutrition as well as energy from the food they consume. So, make sure what you offer will be easy for the plant to eat, and it comes packed with protein.

Mealworms, bloodworms, and general worms are excellent food for Venus Flytraps. They contain plenty of vitamins and minerals. In fact, these should make up a large portion of what you feed them regularly. You can offer these freeze-dried or live.

But, you have to compare the size of the worms with the age of your Venus Flytrap. Ensure you give younger plants smaller worms that will be easier to eat. Larger worms are good for older plants.

Live or freeze-dried crickets offer a great source of nutrition for a Venus Flytrap. They’re a little bigger than many other foods mentioned here, so only give these to plants that are large and mature. Crickets provide a source of protein, grain, and veggies since that is their main diet. Thus, the Venus Flytrap will get these by consuming the crickets.

Flies, gnats, fruit flies, and mosquitoes are also excellent options for Venus Flytraps to eat. They contain great amounts of minerals and proteins, which are excellent for the plant. But, you want to make sure they don’t contain any diseases, insecticides, or pesticides. So, you should get them from the pet store rather than in the backyard.

According to many experts, ants comprise at least ⅓ of a Venus Flytrap’s diet. So, feeding them ants is an excellent way for them to get the nutrients, vitamins, and minerals they require. Ants eat a host of foods in the wild, which will transfer to the Venus Flytrap upon eating it.

A variety of arachnids makes for an ideal Venus Flytrap food. However, because of their size and strength, ensure you give spiders much smaller than the opening of the trap. This is because the spider could damage the plant trying to fight its way out.

While Venus Flytraps do have the propensity to consume things like grasshoppers, caterpillars, and slugs, you have to be careful. First, these might be bigger than what the plant can safely consume. Therefore, only give these kinds of bugs in the event you have a monster-sized Venus Flytrap.

Also, these are strong types of bugs. This means they can fight and eat their way out of the plant, thus damaging and potentially killing the Venus Flytrap.

Venus Flytraps should never eat anything other than a healthy, well-balanced diet of bugs. This means human food is off the menu. It is possible for the plant to eat minuscule pieces of birds, rodents, and frogs. Other than that, only insects and spiders will suffice.

What Should You Never Feed Venus Flytrap?

While there are a plethora of foods you can feed to a Venus Flytrap, there are some you should avoid altogether. As a general rule, never give an insect anything with a hard, tough shell. This will be next to impossible for the plant to digest.

There’s confusing information about feeding beetles to Venus Flytraps. On the one hand, they provide a great amount of energy that keeps the plant happy. But, their shells are far too hard for a Venus Flytrap to handle with any amount of safety.

Snails are essentially slugs with a hard shell. So, technically speaking, Venus Flytraps can eat them. However, the snail’s shell will prevent the plant from handling it effectively. So, avoid giving snails altogether to stay on the safer side of things.

Although already mentioned above, it bears repeating that you should never give a Venus Flytrap human food. This means absolutely no meat, dairy, chips, candy, vegetables, or anything. Only feed your Venus Flytrap what it would catch on its own in the wild, and you will ensure it thrives.

There are different ways to feed a Venus Flytrap depending on whether the food is live or freeze-dried. Of course, live food will be better since it mimics their natural habitat the best. All you have to do is release some insects into their enclosure or place worms as close to the trap as possible.

However, with worms and crawling critters, you have to monitor the prey, so it doesn’t damage the plant. Once it enters the trap, you can let the Venus Flytrap do its thing. Consider the steps below for manually feeding insects (dried or fresh) to your plant.

You must find highly nutritious and safe insects and spiders for your Venus Flytrap. Make sure you take the size of the food into consideration so you make it as easy as possible for the plant to digest. Younger plants will need much smaller offerings than ones that are larger and more mature.

2. Get the Food Ready

Before feeding your Venus Flytrap freeze-dried food, you have to prepare it ahead of time. This means rehydrating things like crickets, bloodworms, mealworms and etc. Also, find some sort of tool or implement in which to give the food to the plant. You can use tweezers, toothpicks, or chopsticks for this.

While you wait for the food to rehydrate, find where the trigger hairs are on the Venus Flytrap. Observe the trap you want to feed and find the three little hairs amid the pink section or lobe. They will be in every lobe of the traps on the plant, but they can be difficult to see and identify. This is especially true with younger plants.

These are very thin, narrow, and nearly translucent filaments that are usually around the center of the lobe. You want to trigger these twice within a few seconds of each other, so they activate their digestive fluids. This step isn’t necessary for live food since activation will happen via the plant’s interaction with the bug.

With your implement, grab the worm or insect and set it atop the Venus Flytrap’s lobe. You can place this near or on the trigger hairs. Once the hairs sense the insect, the trap will close. So, once you securely have the bug in place, remove your implement quickly. This is because tools can damage the trap.

The idea of feeding is to replicate the sensation and movement of insects within the lobe of the trap. So, even though the trap closes at a considerable rate, it doesn’t close completely upon impact. This is because the plant is attempting to gauge if there is anything else to stimulate the process of digestion.

In the case of live insects, the bug will try to fight its way out upon contact with the lobes once they close. But, this attempt to free itself is futile; it merely activates the trigger hairs to close the lobes further. So, when you feed it dead food, it needs this movement, and you will have to simulate it.

You can do this with your fingers or your tool. Simply touch the trap’s sides a little. Be gentle and slow but do this several times for about 30 seconds. When the trap shuts entirely, you can stop. You may have to do it for an additional 30 seconds if it doesn’t close the first time.

Once the Venus Flytrap has food securely in its lobes, you have to monitor the plant. This will not only guarantee you were successful in feeding, but you can also check for blackening or withering leaves.

Venus Flytraps don’t chew and swallow their food like animals or people. They use enzymes to break down the food, which slowly infuses into their stems, leaves, roots, and traps. So, it will be natural for the trap to stay closed during the process of digestion.

This means you will have to monitor the plant right after feeding and then periodically over the next several days or weeks. Also, understand that wilting is a common occurrence after feeding. This can indicate one of two things: the food was far too large for the plant, or the leaves were ready to drop anyways.

Can You Feed Venus Flytraps Fruit?

Venus Flytraps don’t eat fruits in the wild. So, do not feed it any kind of fruit. It will cause the plant to turn black, rot and die.

No, never feed fries to a Venus Flytrap. This is human food, and all such items meant for people are not ideal for this type of plant (or any plant for that matter).

Venus Flytraps love eating a variety of worms. Mealworms, bloodworms, earthworms, and other creepy crawlers are advisable. However, you want to make sure the size of the worm is small enough for the plant to consume, so it doesn’t have problems with digestion.

Like fruit, vegetables are not part of a Venus Flytrap’s diet. Therefore, they cannot eat them. They need protein provided by a well-balanced diet containing a variety of bugs and spiders.

There is a lot of debate about feeding ladybugs to a Venus Flytrap. To be on the safe side, don’t give ladybugs. These have tough exoskeletons, and they secrete their own substance that could infect the plant. But, some people say it’s absolutely fine, and they’ve never had a problem.

How Big Should Bugs Be for Venus Flytraps?

The best size foods for Venus Flytraps are morsels about ⅓ the size of their lobes. Never give food that will take up over half of the trap; it will be far too difficult for the plant to digest. This will certainly result in leaf and plant damage.

Venus Flytraps can eat plentitudes of bugs that are soft and full of protein. This means mealworms, bloodworms, ants, spiders, and other similar critters will be an excellent part of a well-balanced diet. The food their prey consumes means the plant will benefit from nutrition and energy.

Never give a Venus Flytrap large, hard-shelled food. These will be difficult for the plant’s digestive enzymes to break down effectively. Therefore, replicating feeding the conditions, this plant would acquire for itself in the wild will ensure it thrives for many years.