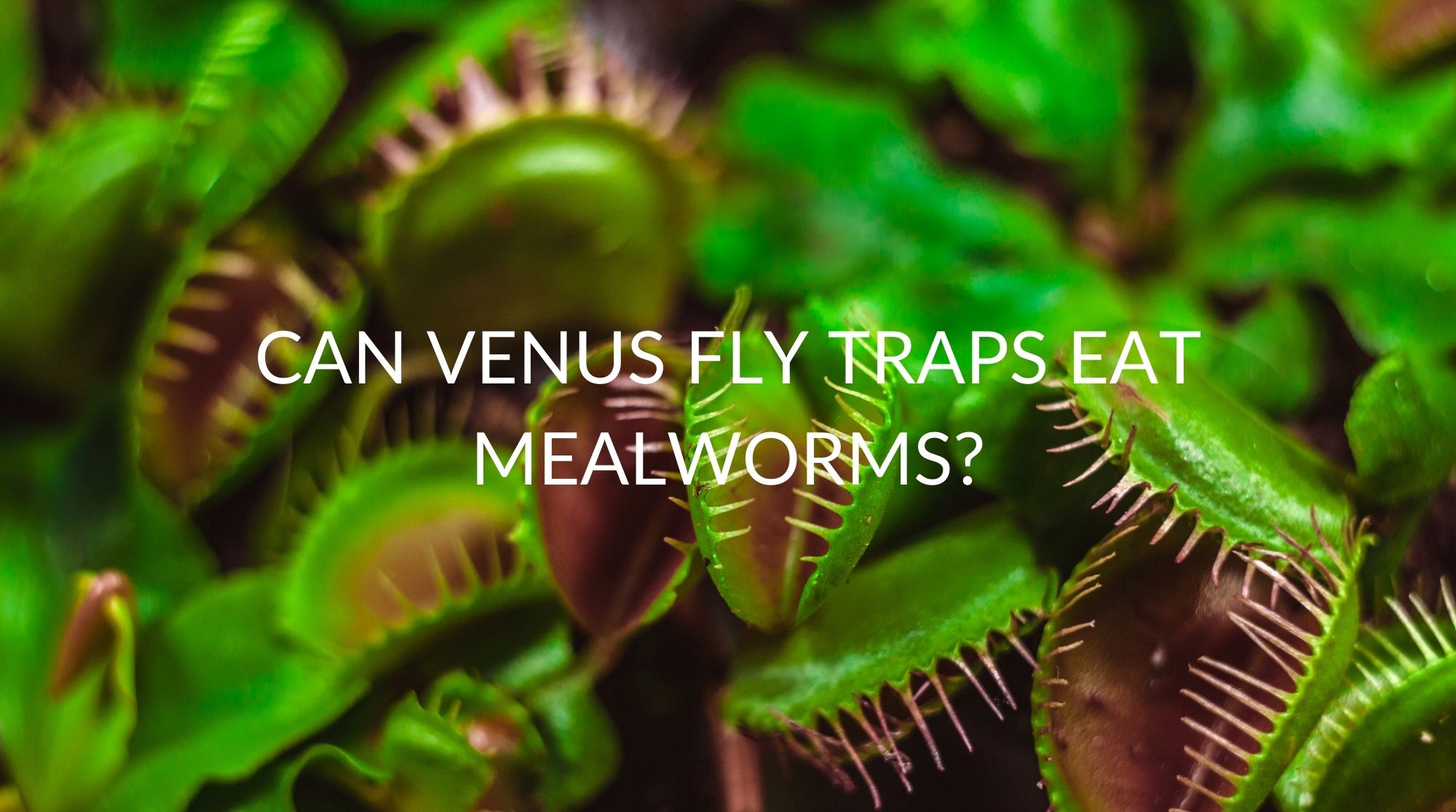 Mealworms can make a great part of your Venus flytrap’s diet because they have nutrients and proteins that support a healthy diet. They are easy to digest and do not typically leave much of an exoskeleton because of their small size. However, many outdoor flytraps do not require any additional insects as a part of their diet since they are already exposed to enough insects outdoors.

You can feed your Venus flytrap mealworms in several ways, like whole and living or frozen mealworms. There are many ways to give your plants their mealworms. Typically, people recommend feeding your flytraps living mealworms because it gives them the most nutritional benefits.

Venus flytraps can eat mealworms as a part of their regular diet. Mealworms have a substantial amount of nutrients and vitamins that can support the growth of your little plant.

However, mealworms can be too large for Venus flytraps. Observe the size of the plant before feeding them. They should be no larger than ⅓ the size of your plant’s trap. Any larger and it will be undigestable.

Mealworms can be an unhelpful addition to your Venus flytrap’s diet. If your Venus flytrap lives outdoors, then they will not need any additional supplements in their diets. They will have already caught enough bugs outdoors. Indoor plants may also already be satisfied by gnats and indoor spiders.

How Many Mealworms Does A Venus Flytrap Eat?

Feed your venus flytrap one mealworm per trap. If the worm is any larger than ⅓ the trap’s size, then the Venus flytrap will have difficulty digesting. Cut the mealworm to accommodate the smaller size.

A flytrap only needs one mealworm at a time. It is best to break it into pieces if your Venus flytrap is small.

How Often Should You Feed Mealworms To Your Venus Flytrap?

A venus flytrap can go months without needing meals. Once they have satisfied their dietary needs, they do not need additional feeding. Be mindful of how much you feed your Venus flytrap. Whether they live indoors or outdoors, they are likely receiving plenty of insects from the environment.

If your Venus flytrap lives outside, you do not need to feed them any mealworms. They likely get all their food from their natural environment. Insects like flies, spiders, beetles, and slugs are natural parts of their diet full of protein.

How To Feed Mealworms To Your Venus Flytrap

There are other ways to feed them mealworms that can be as effective as using tweezers, like freeze-drying or cutting your mealworms into pieces.

Any non-living elements will need a non-abrasive object placed inside to brush the trichome for proper digestion activation.

One of the most direct ways to feed your Venus flytrap mealworms is by depositing them directly into the traps while the mealworms are still alive. After you place the squirming worm on the surface of the trap, it will inevitably move and trigger it closed. You can feed your flytrap whole mealworms using several methods, like tweezers, your fingers, and more.

When feeding your Venus flytrap living mealworms, no food should be any larger than ⅓ the size of the trap. You can cut your mealworms into pieces to make them more digestible. Cutting the mealworm into pieces is helpful, especially for younger plants.

Use a pair of tweezers or a small scooper to place cut-up mealworms on your plant’s trap. Be prepared to respond to the trap immediately if you trigger numerous hairs at once. If not, you will trigger the sensory hairs during the second distribution.

Freeze-dried mealworms do not have as many nutrients and vitamins as living mealworms because they have already died. So, they will not be as beneficial to your plant. However, they are still great for an additional supplement if the Venus flytrap’s diet requires it.

Tweezers are a wonderful way to deliver mealworms into your Venus flytrap’s mouth. They come in various shapes and sizes that can make transporting loads of mealworms convenient and mess-free.

The various shapes and sizes mean you can easily transport living and freeze-dried mealworms to trap surfaces without activating the trichomes.

Venus flytraps clamp down on anything that touches their trichomes, whether it is edible or not. Therefore, you should be careful when free-dropping something into their mouth to feed them.

Other Food To Feed Your Venus Flytrap

Many slow, small, and grounded insects make great food for the Venus flytrap. Small, slow-moving insects are great for feeding your Venus flytrap because they are less likely to escape the carnivorous plant’s closing jaw-like leaves. They are more vulnerable to the Venus flytrap and very easy to catch.

The Venus flytrap is a small plant that cannot catch large prey. Therefore, you mustn’t feed too large insects. If you plan on feeding it a large insect, it must be no larger than ¼ of its size dead and ⅓ of its size living bugs.

If you haven’t started a slug garden, it is time to get going. These helpful little insects provide great nutritional value for your carnivory flytrap, and they are too slow to escape the plant. You should feed them slugs or snails without shells, so they do not stop digesting early by mistake. However, shells might crush during the process.

Beetles are a good choice for your Venus flytrap if you look for a healthy alternative to mealworms. They have nutritional value and a similar crunchy texture if your plant is known for crunching its mealworms. Unfortunately, some beetle species can be fast-moving and difficult for the Venus flytrap to trap if you feed them alive. To get around this, simply feed them freeze-dried or dead beetles.

Spiders are great for feeding your Venus flytrap, whether they are living or dead. If you do not want to handle living spiders, feed them a freeze-dried one. Despite being fast, they are one of the most common victims of the Venus flytraps mainly because they activate the trichomes quickly.

If the lobes are small, you will need to cut the grasshoppers in half or thirds to accommodate the small size of a Venus flytrap. Otherwise, you can place the grasshopper directly inside the trap. When it moves, it will activate the trap, and the lobes will come together at a rapid speed too quick for the grasshopper to jump out.

Be careful when handling grasshoppers, so they do not jump from your Tupperware. If they do, do not worry. Grasshoppers are easy to catch if you lay traps out and have patience.

Mealworms can be a great option for some Venus flytraps. They have the protein and nutrients that your plants need to thrive. But not all Venus flytraps require the proteins from mealworms if they are already getting their daily caloric intake elsewhere. Most people assume outdoor plants are the only ones who receive enough food. Still, indoor plants receive plenty of natural insects.

Not all Venus flytraps require additional protein from insects like mealworms since they receive their daily nutritional intake from the insects in their surrounding environment. When feeding your Venus flytrap, guarantee that the mealworms are no larger than ⅓ the size of the trap. Otherwise, it will be undigestable for your Venus flytrap.

If you’re grossed out by the creepy crawlies, there are many alternatives to feeding your Venus flytrap mealworms. However, they are all just as arguably creepy and crawly. Bugs like grasshoppers, slugs, and spiders are excellent for mealworm replacements. They are full of nutrients that will keep your Venus flytrap healthy.