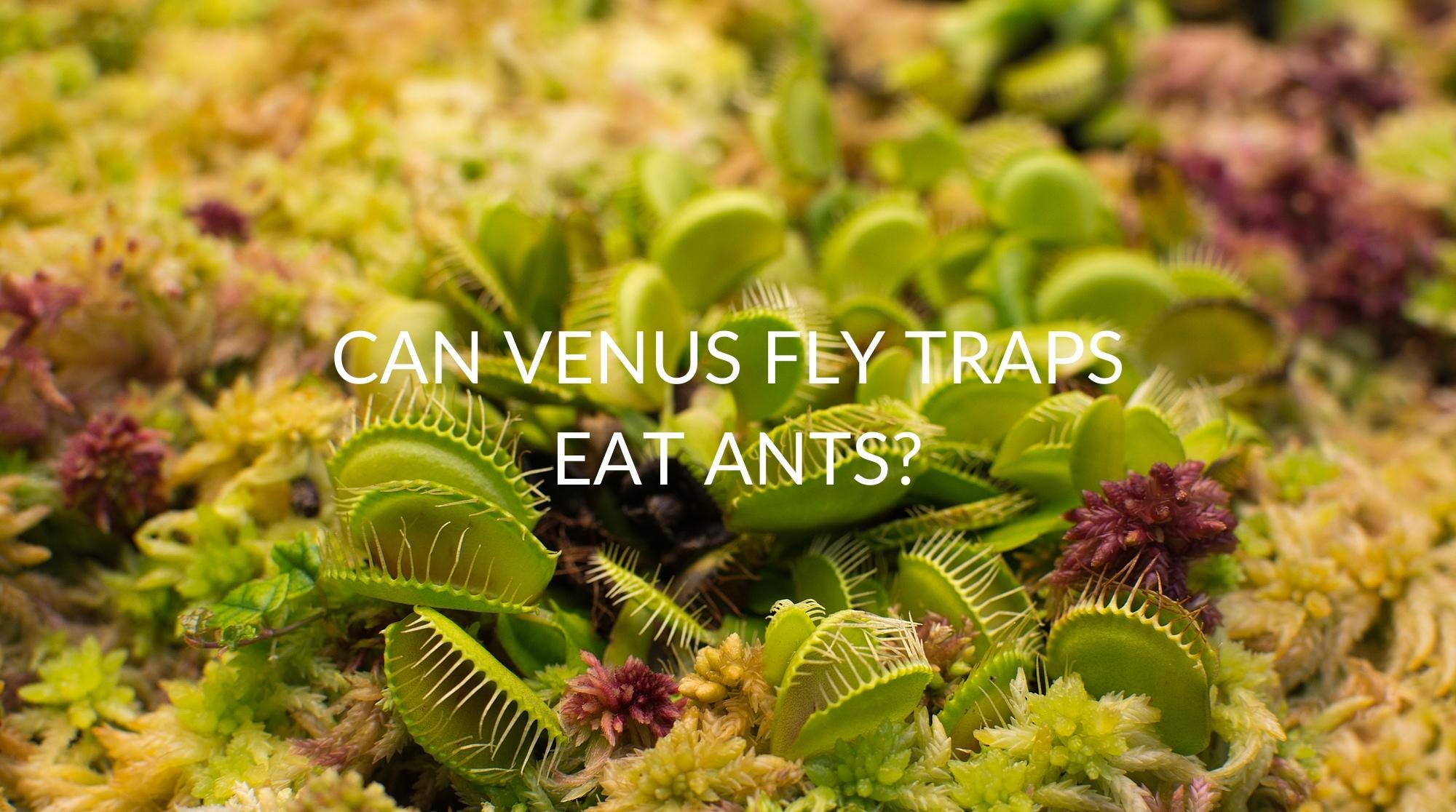 When summer arrives, so do the ants. If you have a problem with ants around your property, you may have considered getting a venus fly trap. However, this is only effective if the venus fly trap will eat ants.

The Venus flytrap is an exotic plant that’s best known for its ability to trap and capture certain insects. This plant grows in poor-nutrient soil, so it relies on insects to survive and stay healthy. The Venus flytrap has a capture organ, which they are able to lure the insects into.

Venus flytraps mainly eat small insects and arachnids. They will often capture flies, spiders, beetles, grasshoppers, and other insects that cross their path. The plant is able to do this because it has a trap at the end of each leaf in which it can capture the insect as it approaches the plant.

As long as the insect can fit into the plant’s trap, they will be able to eat it. These plants love to eat live insects, and meaty insects like slugs and caterpillars are among their favorite foods.

Ants can fall victim to the venus fly trap because they are small enough to fit on the leaves with the traps. If you are tending a venus fly trap, you can feed it ants to give it more nutrients. Even though the name suggests that the plant only captures flies, it also gets nutrients from other insects, such as ants.

Venus flytraps tend to consume ants regularly because they are an insect that travels in packs. A large ant colony in the area can provide a lot of nutrients to a venus fly trap. Most ants are just the right size to be captured by the Venus flytrap, making them an excellent choice of insect to give to your plant.

In the wild, ants are the main food source for the venus fly trap. According to Wikipedia, 33 % of this plant’s diet is ants. That also makes up the highest percentage of any insect consumed, as flying insects only make up 5 %.

When learning about what to feed a venus fly trap, you may be advised not to feed them ants. This is because ants have very little protein compared to other insects, like beetles and caterpillars. Some botanical experts believe that the plant’s energy should be used on insects that add more protein to their diet.

There have been cases where a trap dies after capturing black ants. If the ant has come into contact with pesticides or other harmful substances, it will have difficulty digesting the ant. In this event, the plant’s trap will not reopen after consuming the ant.

Typically, a venus fly trap doesn’t have a negative experience eating ants, as they are a common food source in the plant’s natural habitat. A venus fly trap usually only struggles to capture insects that are larger than its trap. This is why it’s strongly advised not to attempt giving them an animal.

Please keep in mind another insect that you should avoid giving to your venus fly trap is crickets. Many people chose crickets because it’s common for pet stores to sell them as food for reptiles. While a venus fly trap typically has no problem catching a baby cricket, full-grown crickets are too big.

How Are Ants Attracted To Venus Fly Traps?

The Venus flytrap is considered a preditor to ants, so this may have you wondering why an ant in the wild would even approach one in the first place. This plant can’t trap an insect unless the insect approaches it. The ant doesn’t have to just get close; it physically has to get on the venus fly trap’s leaf to get captured.

So, how does a venus fly trap attract ants to its deadly trap? Inside the plant’s leaf lobes is very sweet nectar with a sugary aroma that attracts ants and other insects. If you have ever spilled juice or soda, you may be familiar with how ants flock to this sugary substance they smell.

As mentioned above, ants in the wild are the main food source for venus fly traps, and there is a very good reason for this. Since the venus flytrap is a short plant, some of its leaves are very close to the ground. This sweet-smelling leaf seems very inviting to the ant because it’s at the perfect level for them to walk up to.

How To Feed Ants To A Venus Flytrap

How you feed your Venus flytraps ants strongly depends on if it’s an indoor or an outdoor plant. The good thing about an outdoor plant is that it does all the work for you by releasing the nectar. Ants are naturally attracted to it, so any ant infestation you have outside your property will likely clear up on its own once you introduce this plant.

However, if your venus fly trap is potted and kept indoors, there are a few things you should know about feeding your plant.

Make Sure the Ants are the Right Size

If you’re going to feed your indoor venus fly plant ants, it’s very important that you get the right size of ants. While it’s highly unlikely you’ll cross paths with an ant that’s too big, you could trap ants that are too tiny. If an ant is too small, it can escape after the plant has captured it.

Measure the plant’s trap to get a good idea of what you are working with. Try to capture ants that are at least 1/3 the size of your plant’s trap.

Know Where To Place the Ants

In order for the Venus flytrap to close its trap, its trigger hairs will need to experience two stimuli in a very short period. This alerts the plant that the prey is in the trap. If you don’t place the ant in a spot that touches the trigger hairs, it will be able to escape.

Examine the plant’s leaf lobes to locate the rigger hairs. Each lobe will have three hairs that form a triangle. Once these hairs have sensed the insect, the trap will shut.

Placing ants in a venus fly trap with just your hands is very difficult. You may crush the ant or miss the right spot to place them. For this reason, it’s recommended to use a tool like tweezers to make the process easier.

Tweezers make it easier to pick up individual ants and place them in the right location. You can also use the tweezers to touch the plant’s trigger hairs twice.

Ants are quick, so they can escape if you’re not precise with this process. You will need to be accurate with where you place the ant and quickly stimulate the trigger hairs for this to work.

Wondering whether Venus Flytraps are poisonous to cats?

Once a venus fly trap has captured an ant, the digestion phase takes anywhere from a few days to a couple of weeks. After this time period, when the feeding and digestion have finished, the trap will reopen, showing the empty carcass.

However, if the feeding process is unsuccessful, you’ll notice the trap stays closed and begins to wither.

Venus flytraps can eat ants. In their natural habitat, ants make up the majority of the plant’s diet. While they aren’t a preferred food source for the plant, they are very common to feed on. It’s very easy for an outdoor venus fly trap to capture ants because it releases sweet nectar that these insects are highly attracted to.

If you are capturing insects for your venus fly trap plant, you may be better off choosing one with more meat on it. Venus flytraps love to eat beetles, slugs, caterpillars, and spiders too. These insects offer more protein and nutrients, and they are easier for the plant to digest.