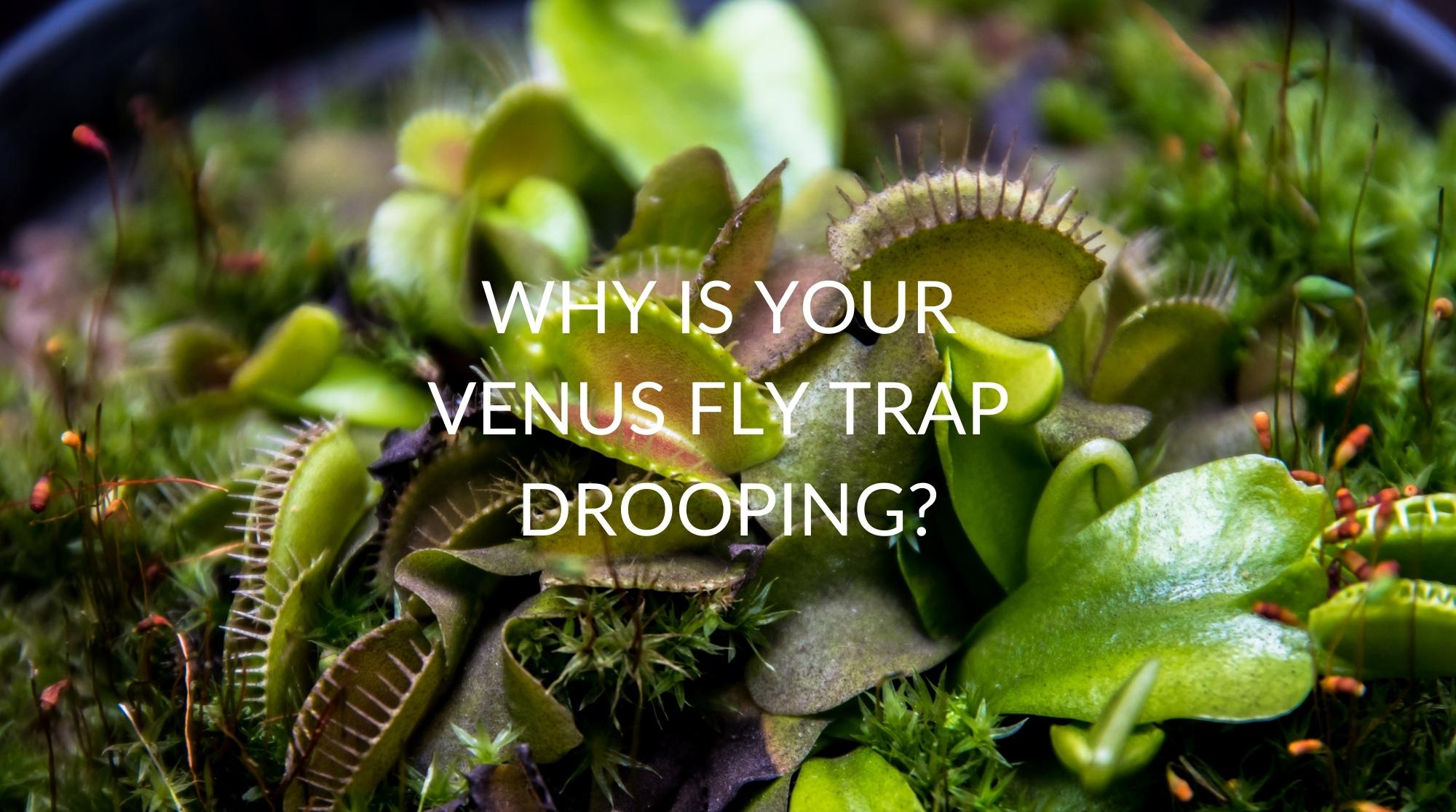 If you own a Venus flytrap, and you’ve noticed it looking glum lately, naturally, you’ll assume the worst. However, there are various reasons as to why your plant is looking droopy; lack of sunlight, wrong terrain, lack of water, disease/pests, and seasonal change.

To keep a Venus flytrap from dying and care for it the right way so that it can be revived, you’ll need to provide solutions to the reasons mentioned above.

Read on to find out all about what causes a Venus flytrap to start drooping, how to prevent it, and fun facts about the plant, its mood, and its nature.

Are Venus Fly Traps Supposed to Be Droopy?

Some types of Venus flytraps are inherently droopy, not from the lack of care from the owner. Their gloominess can also be caused by seasonal, environmental, or atmospheric changes acclimating periods. Venus flytrap has a dormancy period during winters from October to mid-February, during which it becomes droopy and goes back to normal after winter ends.

If we’re talking about spring or summer seasons, then no, Venus flytraps are not supposed to be droopy. The reason is that they should naturally be cared for enough for the leaves and branches to stand upright and not wilted. A deficiency in that nutritional care from the owner of the plant (lack of water, sunlight) would cause the plant to droop slowly.

As novelty plants, Venus flytraps require extra care and attention, or else they slowly wither up and die. Finding out the reason why your Venus flytrap is drooping is the key to figuring out how to stop the plant from wilting.

Why Is Your Venus Fly Trap Drooping?

To solve this problem, you need to know the reasons why your Venus flytrap is drooping.

Venus flytrap needs a lot of sunlight as nutrition on a daily basis, approximately 6-12 hours of sunlight. If that condition isn’t met, the plant will wither and loom down till it reaches the ground, and we wouldn’t want that. As such, this carnivorous plant is unsuitable for indoor planting.

The wrong sort of water can be hazardous to your Venus flytrap and make it sick. Using water with high dissolved minerals concentration will cause it to wither, as it can only grow in distilled water. Venus flytrap also needs constantly wet soil to thrive, so if the soil gets dry between watering times, your plant will start to wilt.

Venus flytrap needs 50% or more humidity (moisture) in the air for it to thrive; any less and your plant will become ill. Not only the temperature and the air, but the soil must be humid as well. If these conditions aren’t satisfied, you’ll probably have to say goodbye to your Venus flytrap.

Despite being a carnivorous plant, the Venus flytrap can also fall prey to pests and diseases, just like other types of plants and vegetation. Spider mites, aphids, and diseases the likes of fungal attacks (caused by overwatering, high humidity, or winter-like temperatures) can also cause your plant to become sick.

Venus flytrap is an unusually sensitive plant, especially to soil and atmosphere changes. So if you bring your plant home and notice it starting to limp or wither, it means your plant is disturbed by the sudden environmental change and is taking its time adjusting to the climate of your home/greenhouse.

What to Do If Your Venus Fly Trap Is Drooping

After identifying the reasons for its droopy condition, you should work on improving those conditions and rectifying them by:

Venus flytraps need a proper amount of sunlight to revive, which they cannot get indoors. Place your Venus flytrap outdoors (garden or greenhouse) where it can get the right amount of sunlight. Other than natural sources, artificial ones like LEDs or fluorescent lights can also work to provide your plant with the light energy it needs to function and stop drooping.

Now that you know which kind of water to not use to water your plant, use distilled, demineralized, or osmosis water instead. This will filter out the toxic minerals inhabiting the Venus flytrap and revive your plant, granted it would take a few days for you to see the difference. To check for water suitability and nutrient count, use a TDS device.

Do not let the soil dry up in between watering your Venus flytrap. Improve your watering habits by watering it as soon as the soil gets a bit dry to keep it wet. Water the plant every 2-4 days during summer/spring (moderately, don’t flood it) and only once a month during dormancy.

Use a humidifier to provide warm temperature, moisture, and humidity for your plant and get it out of its droopy misery. You can also use the water tray method or an open terrarium for affordable but efficient alternatives. Make sure that the temperature is not too heat-intensive; otherwise, the Venus flytrap will start limping again.

The ideal soil for your plant to revive itself is nutrient deficient soil, acidic in quality with a PH of 7 and below. To make this type of soil at home, use a mixture of sand and peat in a 1 to 1 ratio. Never use fertilizers to accelerate your plant’s growth, or it will droop again.

Protect Against Pests and Diseases

To stop the Venus flytrap from drooping because of a disease or pest attack, use insecticides or a flea collar. Fungal attacks can be prevented by using fungicides easily purchasable from local stores. They can also be prevented by reducing mistakes like overwatering, high humidity, and low temperatures.

How to Prevent Your Venus Fly Traps from Drooping?

Other than the aforementioned, you can also take these preventive measures to ensure your plant does not droop again in the future:

Venus flytraps are known to also droop because of stressful conditions. To avoid this, keep curious animals like cats or dogs away from the plant, don’t change its location so abruptly, and don’t mess with the traps of the plant.

If you are growing your Venus flytrap in a pot, make sure to purchase one which has holes at the bottom or on the sides for excess water ventilation. If the soil does not have any way to get rid of its excess water, it will over-flood, causing your plant to wilt again.

If you’re actively using the water tray method to provide a humid environment for your plant, make sure to take care of the saucer’s cleanliness every once in a while. This will help avoid any drooping caused by fungal growth, saving you the money wasted on fungicides.

Some types of soil develop a high concentration of nutrients over time. It’s important that you check the soil’s nutrient count after a few months have passed and replace it if the need be.

If your see white mold growing in your Venus Flytrap, it could be a sign of something else.

We know that Venus flytraps flourish the best in low-nutrient soils, but this sometimes leads to them not getting enough nutrition, especially if you’re keeping them indoors, leading to drooping. To rectify this, provide them with a steady supply of insects to feed on.

How Do I Find Out if My Venus Fly Trap Is Dying or Just Dormant?

A dying Venus flytrap will have black or very dull leaves with no sign of life in them, and its insides turn into mush. In contrast, a dormant one will be withered or droopy, with the color of its leaves still intact, albeit dull. For more information, click here.

How Do I Know My Venus Fly Trap Is Light Starved?

Light deficient plants cannot open large traps to lure in insects to feed on. The insides of its lobes will also be light red instead of dark (in the case of a healthy Venus flytrap). To know more, visit this site.

Venus flytrap is a plant that requires nutrient-deficient soil and water, with high levels of humidity and an adequate light source. However, if these conditions are not met, the plant will droop or wither, causing a problem for the owner.

Thankfully, these problems can be solved by using simple equipment and techniques (watering habits, good light source, adequate soil, and water), which will help salvage your Venus flytrap and bring it back to life in no time.