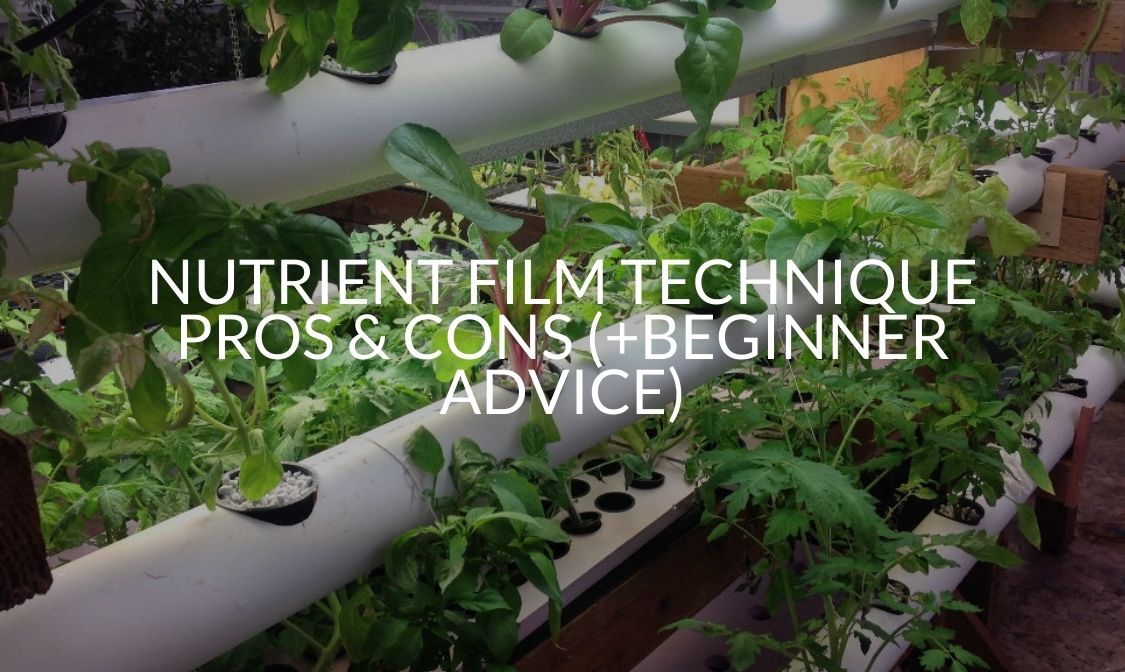 You’ve been gardening for a while now, and your greenhouse is full of lively flowers and plump veggies. Now you’re thinking about trying your hand at a hydroponic system for your plants since it takes a lot of the pressure off of regular watering. But there are a handful of different hydroponic setups, and deciding on which to go with can be tough.

What Is Nutrient Film Technique Hydroponics?

Nutrient Film Technique, or NFT, hydroponics is a method of hydroponic growing that employs a sloped channel the plants are seated in that feeds “used” water back into the reservoir below the tray. Many gardeners DIY channels out of PVC piping to save money over a commercial set-up.

Water is fed into the upper part of the channel so it flows down, providing water and nutrients to plants as it flows down the channel. In the reservoir, the water is aerated and “fed” with nutrients so that the plants stay happy and healthy.

NFT Hydroponics is generally a more complex method than the easier-to-set-up Deep-Water Culture. However, it is also more modular and can be scaled up easily so long as you keep your water flow, nutrient levels, and aeration dialed in properly. Many beginners will shy away from NFT due to the increased complexity, despite its advantages.

How Does NFT Hydroponics Work?

Now that your interest is piqued, let’s take a look at what all goes into an NFT hydroponic setup. To build yours, you’ll need a few things first.

Here’s a list of the components your NFT system will need to have:

The two main components of an NFT system are the channels or grow trays and the reservoir of nutrient water. The net pots hold seedlings in the channels, which will need to be spaced out according to your plants’ needs. This allows the root systems to spread out in the channel and absorb water and nutrients from the channel directly.

The nutrient pump feeds water up tubing into the channel, where it runs down into the reservoir for reuse. This helps prevent overwatering since there is a constant trickle of nutrient water through the root systems of your crops. This thin film of nutrient solution carries enough water and necessary minerals and chemicals to keep your plants in ideal condition without worrying about watering and feeding your plants separately.

What is Hydroponic Nutrient Solution?

Plants, like any living organism, need nutrients to grow and thrive. In hydroponic systems, a solution of nutrients and water serves as a replacement for fertilizer and naturally occurring nutrients in soil-based grow. This solution contains all the necessary nutrients to support the growth of your crops. It’s much easier to measure levels of various nutrients in a solution than in the soil.

These three are the most important and are needed in the largest quantities in a hydroponic nutrient solution.

These three are also crucial for plant development but to a lesser degree than the first three.

The four micronutrients above are also considered important for the proper growth of your plants, though in smaller quantities than the macronutrients.

What Is the Best Growing Medium to Use in an NFT System?

Growing crops in the soil can leave you open to invading weeds and soil-borne diseases. One of the biggest advantages of any hydroponic system is the elimination of these risk factors. With a hydroponic system, you can control the nutrient and oxygen levels that your plants receive throughout their lifespan. So, if your plants aren’t grown in soil, what’s the best growing medium to use for NFT hydroponics?

Growing media may function similar to soil, but the nutrient water is the real replacement from a plant needs perspective. Growing media in NFT systems are more for supporting the plant since nutrient water is constantly flowing through the medium. Because of the regular water and nutrient availability, an NFT hydroponics system is well-suited to mediums with low Water Holding Capacity, like clay pebbles and expanded clay aggregate.

What Are the Pros of NFT Hydroponics Method?

Now that we know a bit more about what NFT systems are and how they operate, let’s look at some of the advantages of using an NFT hydroponic setup. Overall, it is a flexible, low-cost, and low-maintenance system, making it a favorite of many gardeners.

Taken together, these points make a strong case for deciding to use an NFT system for your new hydroponic set-up.

What Are the Cons of NFT Hydroponics Method?

But what about the drawbacks? Surely, there must be some. As with any system, there are bound to be limits, so carefully consider what you’re going to grow and the requirements of those plants.

Limits of the Nutrient Film Technique method include:

These limitations are pretty significant, so weigh them carefully against other methods of growing hydroponically.

So, you’ve decided on a Nutrient Film Technique system for your hydroponic set-up. Now comes the ultimate question: What to grow in your NFT system? It’s an important question to answer before building your setup. Some plants are perfect for NFT systems, while others are not such good ideas.

NFT systems are best suited to growing leafy greens with short growing cycles. Some other plants, like herbs and strawberries, can be grown with some success. Crops with large taproots, such as carrots and beets, are not well-suited to NFT systems. Larger, heavier leafy greens like cabbage may also prove problematic to grow.

Spacing your seedlings out properly is important, so if building your own be sure to drill holes for your net pots in the proper places for the crops you plan to grow. Bunching them up too closely can cause growth issues, as well as entangled roots that may block your channel.

What vegetable grows well in an NFT system? As stated above, leafy greens with short lifespans dominate the NFT hydroponics world. If you’re looking to up your salad game with home-grown veggies, then an NFT system may be right for you.

Veggies that grow well in Nutrient Film Technique systems include:

What if you’d rather not grow veggies? Perhaps you’d prefer an aromatic hydroponic garden filled with herbs. If that’s the case, you may be wondering which herbs tend to grow well in an NFT system?

Herbs that do well in NFT systems include:

Maybe you’ve got a hankering for home-grown fruit? Can you grow anything sweet and juicy with an NFT hydroponic system? You sure can!

NFT systems are best known for growing fruit like:

Who is NFT Hydroponics Best for?

Nutrient Film Technique hydroponics are best suited to a few types of people. Those who have a do-it-yourself streak like the simplicity and cheapness of their construction. People who prefer a lower-maintenance system will likely prefer the NFT. Growers who want leafy greens, herbs like basil, or fresh berries would also do well to try out an NFT system.

In summation, the Nutrient Film Technique is a method of hydroponic growing. It employs a pump in the reservoir to bring water up to the channel (or grow tray), which is slanted to allow the nutrient water to drain back into the reservoir. This cuts down on water and nutrient consumption protects against overwatering and gives easy access to roots for care and maintenance.

An NFT system is a great way to grow leafy veggies, some herbs, and fruit like strawberries and blueberries. They are well-suited to gardeners who are particularly handy, or who want to take advantage of the relatively low maintenance requirements of NFT systems.