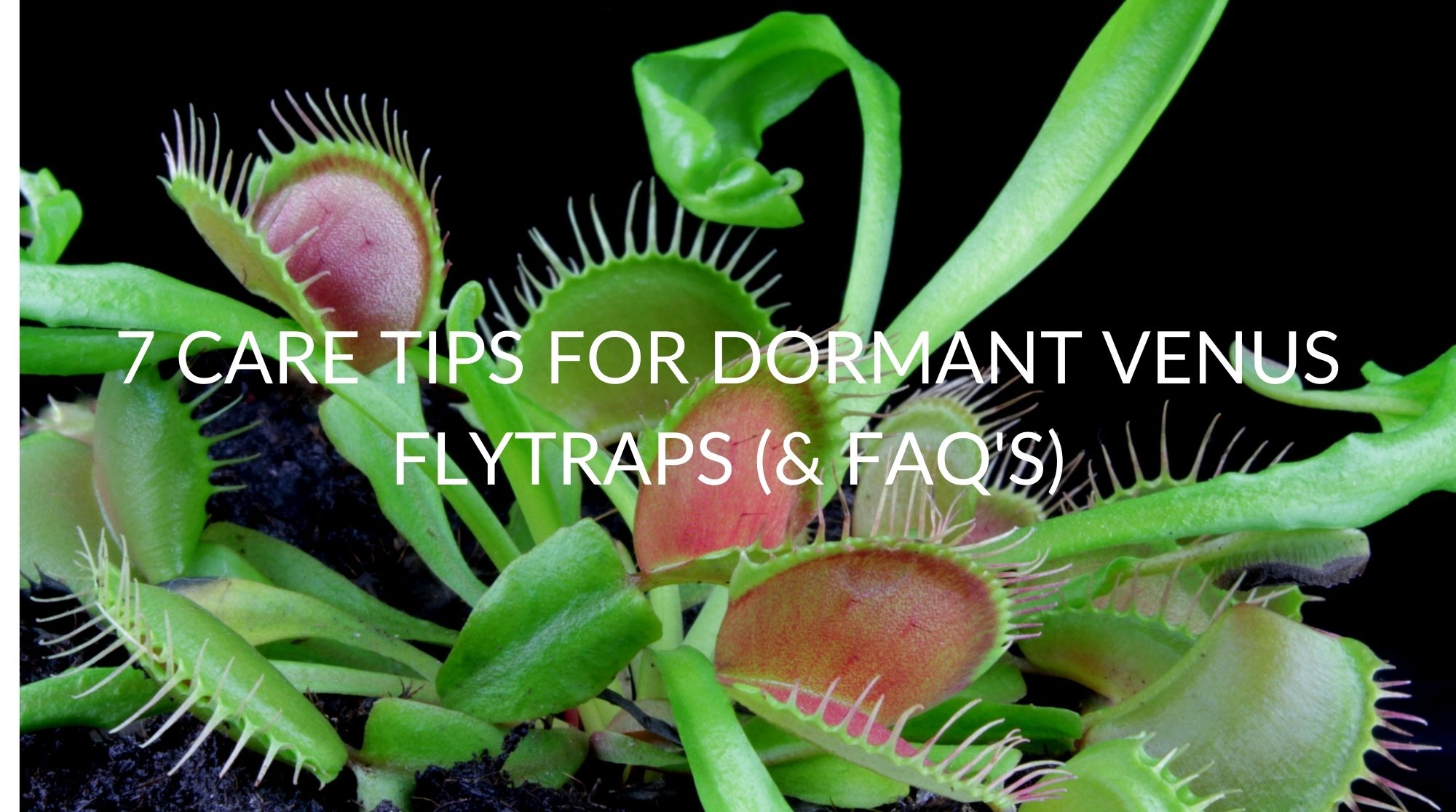 A Venus flytrap is a thrilling plant to watch bloom and grow, and they are anything but low maintenance. In order to keep a Venus flytrap indoors, you have to properly feed it, give it adequate light and water, and let it go dormant in the winter.

In a Venus fly trap’s natural environment, they will go through a dormant stage in the winter months. This allows the trap to keep their energy levels intact while protecting them from the cold. Venus flytrap dormancy allows these unique to live up to 20 happy years.

Venus flytraps go dormant from the months of November to February. When Venus flytraps are outdoors, they will go dormant for anywhere between three to five months. They will prepare for this period themselves, and they will be able to sense when it’s time to come out of dormancy.

If you are looking to support your fly trap’s natural dormant period, consider helping them enter winter dormancy between November and February as well. It takes the Venus flytrap some time to transition from their open stage to their dormant stage, and once they are dormant, they need some time to stay that way in order to adequately keep their energy levels in check.

There are multiple ways to ensure your Venus flytrap goes dormant when they need to. You should expect that it’s going to take some effort to support your plant’s dormancy, regardless of where you live or where you grow them.

The Venus flytrap needs dormancy in order to restore its energy. Dormancy helps them withstand colder temperatures than they are used to. In order for a Venus flytrap to live as long as possible, they need to have a dormant period.

During their dormancy period, Venus flytraps don’t eat. Proper feeding is necessary outside of dormancy, especially if your plant is indoors, so they have enough energy to keep themselves healthy during dormancy. The combination of energy earned from feasting on bugs and from sunlight helps keep them nourished while dormant.

The Venus flytrap has had to undergo a lot of evolution in order to survive the way they have. From learning to eat insects due to poor nutrients in their natural soil to finding ways to withstand harsh Carolina winters, these plants have been through a lot to survive. The least we can do for them is help them survive by helping them go dormant to save energy.

How To Take Care Of Your Venus Fly Trap During Dormancy

You can bring a Venus flytrap outdoors for the winter if you have a suitable area to plant it and you live in the proper climate. Otherwise, you can take care of your Venus flytrap indoors during dormancy by following a few trusted tips.

Give Them Adequate Water

You do want to continue watering your Venus flytrap when dormant, but be sure not to water them too much. The plant doesn’t need as much water as it usually does, as the soil takes longer to dry up. The material the plant is planted in should just remain moist. Remember that a Venus flytrap needs rainwater or distilled water.

The traps do not need to be fed when they are dormant. Even if some traps are slightly open, do not feed them. It’ll cost them way too much energy to break down the bug. Keeping them on a consistent feeding schedule before dormancy will ensure they have more than enough energy to carry them through the winter.

Give Your Plant Light

Your Venus flytrap should still have a decent amount of light during dormancy. Technically, they can go without it, but they shouldn’t. A healthy plant is one that can take in as much light as possible.

Ideally, you will want to acclimatize your Venus flytrap to temperatures between 32 and 55 degrees Fahrenheit. It’s worth having some type of thermometer in the area where you store your plant for dormancy to monitor the temperature.

If you notice any flowers growing off of your Venus flytrap once they start to come out of dormancy, you should cut them off when they are grown to about five centimeters. These flowers are not needed, and they take a lot of energy for your plant to grow.

Give Your Plant A New Home

If you did not repot your Venus flytrap before they entered winter dormancy, you should consider repotting them once they come out of that resting period. You can remove any of the dead plants that naturally occur before repotting them.

Get Rid Of Pests

Some little pests such as aphids might try to cuddle up to your Venus flytrap in the winter to steal some energy and stay warm. If you notice any of these little critters, spray a safe insecticide in the area to kill them off and remove them.

You will want to slowly start bringing your Venus flytrap into warmer conditions with natural sunlight to help encourage them out of dormancy. One of the easiest ways to do this is to keep their artificial light on for longer periods of time as Spring approaches. Once you do this for some time, you can bring the plant back to its regular spot.

You can choose to skip dormancy for your Venus flytrap, but it’s not recommended. If you’re hoping to keep your plant around for a long time, you should support its natural dormancy period. The minimum amount of time a Venus flytrap needs to remain dormant is ten weeks. Anything less than this each year, and you’re basically cutting the Venus fly trap’s life short.

The Venus fly trap’s ability to go dormant has allowed them to survive in their natural climate for a very long time. The process is similar to how animals hibernate in the winter. If animals were not able to do this, their ability to survive harsh winters would greatly diminish.

The longer your Venus flytrap goes without a dormant winter, the more years you are cutting off from their life. Thus, it’s worth knowing what it takes to support your plant during dormancy before you decide to bring one home. Some experts will skip dormancy when trying to produce seeds from Venus flytraps, but you shouldn’t attempt this until you have more experience with these plants.

How Do I Know If My Venus Fly Trap Is Dormant?

Newer plant owners might think their Venus flytrap is dying and start to worry. Once you’ve experienced a couple of dormancy periods with your flytrap, you’ll be able to easily differentiate between dormancy and death. If you’re not sure, it’s best to leave the plant alone and wait to see what happens closer to Spring.

Some of the traps will start to turn black when they are preparing for their dormancy period. This blackening will happen over a period of time. Because your trap still grows while dormant, you might notice that some traps start to go black even during dormancy.

Some Traps And Leaves Stay Green

Another clear sign that your Venus flytrap is dormant and not dead is if some parts of the plant remain green. You might even notice little baby traps as the plant starts coming out of dormancy. Healthy Venus flytraps will constantly lose and regrow traps.

You want to resist the urge to poke around your plant too much when trying to determine if it’s dormant. You can check it occasionally by gently touching the traps. If it’s mushy, it’s dead, but if it still feels crisp, it’s just sleeping.

Normally, your traps will sit upright, and open traps will point towards the sky. As your plant begins going dormant, the leaves will start to lean to the side, and some may even fall all the way down.

This is because a Venus flytrap is a perennial plant, which means they will die or “sleep” – which is dormancy – in the winter so they can regrow and reflourish in Spring. You can think of the leaves leaning to the side as the plant preparing to take a rest.

The Traps Don’t Flourish In Spring

It can be a little tough to tell if your Venus flytrap is dormant or not until Spring comes. If they were dormant, they should start springing back to life in the Spring. If they don’t, there’s a good chance that parts of the plant are dead.

In your first dormant season, it’ll be hard to tell the difference between traps naturally dying and going dormant. Some traps naturally die during this period, but more should grow in their place. Individual traps have short lifespans, only being able to eat five times before they die.

The Rhizome Is Dead

You won’t be able to check the rhizome until you repot your plant. This is the part of the plant that is located between the root and the traps. It should be white and firm. If it’s black, that means the plant is dead.

You’ll Learn To Recognize It

The first year of winter dormancy with a Venus flytrap can be full of confusion. You might not be able to notice the differences between a dormant and a dead plant. However, you will come to know the signs of each state once you have your plant for a few years.

You’ll also be able to recognize the changes based on the time of year that they start to occur. If your plant starts changing in the middle of Fall, this is a good sign they are ready for dormancy, and you should help the plant get there.

Venus flytraps can successfully go dormant inside, but you will have to create suitable conditions for them to do so. Once you catch the signs of your plant going dormant, you want to manicure them well by removing any dead traps, so the plant doesn’t grow mold. Bring them to a cold area of your home.

Place your Venus flytrap on a windowsill that gets adequate sunlight but also stays very cool. You can also move your plant to an area that stays cool naturally within your home, such as a garage or porch that isn’t heated. Keep in mind you’ll need an artificial light source to keep the plant happy during dormancy.

If all else fails, you can use a fridge to help your Venus flytrap reach dormancy. This method is complicated and needs to be researched very well to do it properly. It takes a lot to prepare a Venus flytrap for dormancy inside a fridge, and you have to monitor it very closely. It’s very common for Venus flytraps to rot when placed in a fridge.