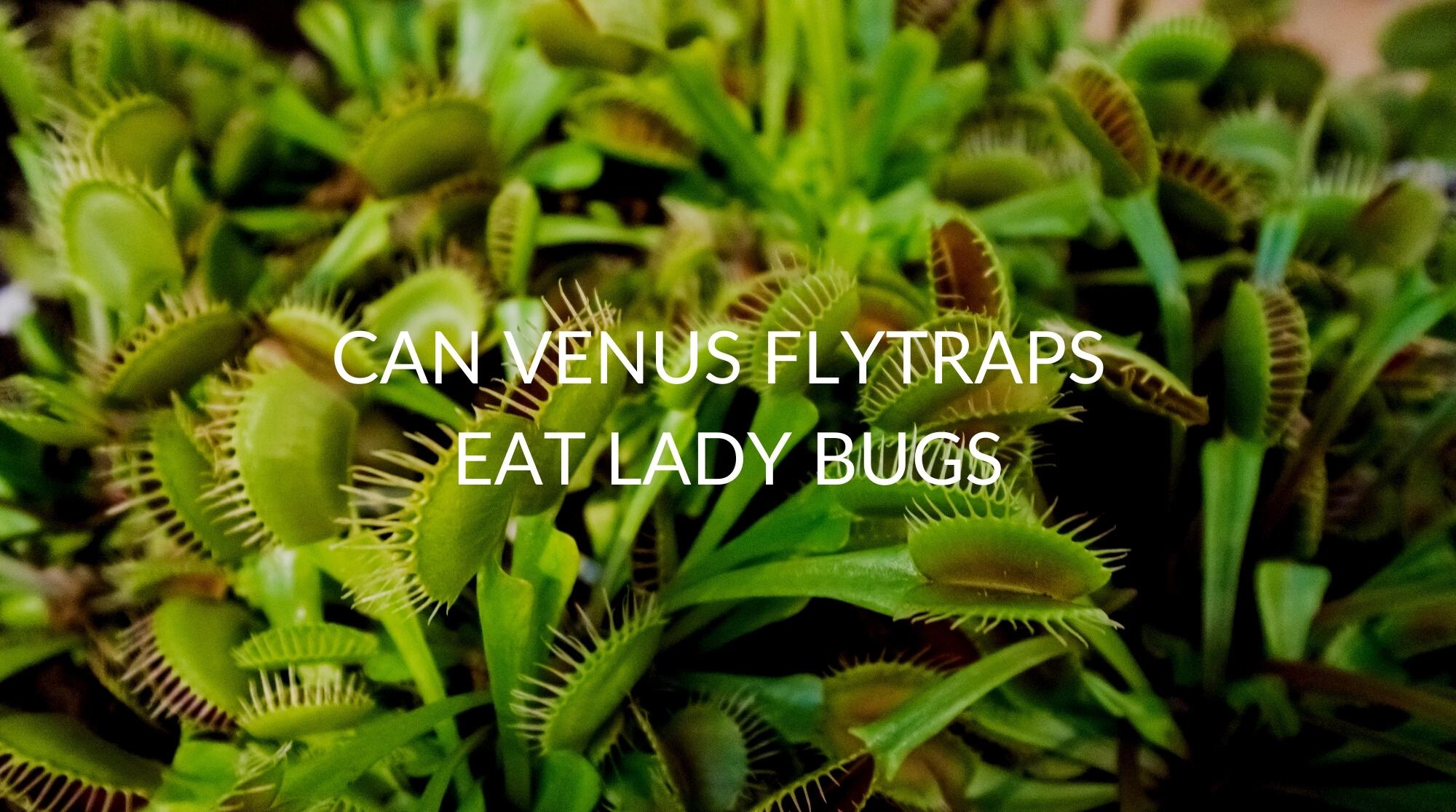 Venus Flytraps are a type of carnivorous plant that are found in the bogs and swamps of North and South Carolina. They are also sold and can thrive as potted plants. Venus Flytraps will capture and digest any insect that crawls onto its specialized leaves or “traps,”

triggering them to close. However, there is debate as to whether or not to feed ladybugs to Venus Flytraps.

Learn more information in this article about the carnivorous Venus Flytrap, including some fascinating facts and if Venus Flytraps can indeed eat ladybugs.

How Does the Venus Flytrap Catch Insects?

The “traps” of the Venus Flytrap are modified leaves consisting of two lobes divided along a midline. Each lobe is edged with spiny teeth that entrap insects when closed. The inside surface of each lobe is covered with tiny filaments called “trichomes” that trigger the trap to close when touched. Because the action of closing causes a significant expenditure of energy, the trichomes must be touched multiple times before closing.

How Does the Venus Flytrap Eat Insects?

Once closed, the spiny teeth help keep the struggling insect trapped. The inner surface of the trap secretes a red sap that slowly floods the trap and digests the insect. It takes up to 10 days to digest an organism. Interestingly, a trap can only close a few times in its life-cycle before dying off and being replaced by new growth.

What Will the Venus Flytrap Catch and Eat?

Venus Flytraps will snap its trap shut on anything that triggers it to close. Any insect unlucky enough to crawl over the trichomes will trigger the trap, such as flies, ants, spiders, grasshoppers, beetles, and ladybugs.

Can I Feed My Venus Flytrap Ladybugs?

There is some debate on Venus Flytrap enthusiast forums about whether feeding them ladybugs is harmful. Some argue that the ladybug’s hard exoskeleton is difficult for the Flytrap to digest, expending excessive energy and causing premature death of the trap. Others argue that an acid emitted by the ladybug as a defense mechanism can kill the trap. Still, others debate that it is not harmful at all.

Does the Exoskeleton of the Ladybug Harm My Venus Flytrap?

All species of ladybugs have a hard, protective shell or exoskeleton covering their bodies. This hard shell can be difficult for Venus Flytraps to digest. Because it may take more time for the Flytrap to digest it, there is a greater risk of bacterial growth from the dead body of the ladybug. This can cause an infection and harm the plant.

Does the Acid From Ladybugs Harm My Venus Flytrap?

Ladybugs have a unique defense mechanism to protect themselves from predators. When threatened, they emit a foul-smelling (and presumably foul-tasting) form of uric acid from their knee joints. When digested by the Venus Flytrap, all that stored acid is released. However, it is unknown if the acid truly can harm a Venus Flytrap.

What to Feed Venus Flytraps Other than Ladybugs

Venus Flytraps are well adapted to catching live insects on their own, especially if they are outdoors. If you must feed them, any recently deceased species of insect will do. You can also purchase food for Venus Flytraps. The most common and easy-to-find foods are crickets, mealworms, and bloodworms.

How Do I Feed My Venus Flytrap?

The insect should be about ⅓ the size of the trap. Once closed, the hairs inside the trap must be stimulated to trigger digestion, so “tickle” the trap through any gaps with a toothpick to start the digestive process. Remember, it takes almost a week to digest its prey, and a trap has a limited lifespan, so don’t overfeed it. If it’s closed, let it do its work.

What Other Food Can You Not Feed Venus Flytraps?

Even though Venus Flytraps are called “carnivorous” plants, do NOT feed them meat! Venus Flytraps only eat insects to supplement their diet with specific nitrogen-rich proteins. Meat will cause your Venus Flytrap to expend too much energy trying to digest it and introduce harmful bacteria to the plant. In short, do not feed your plant anything they wouldn’t catch naturally.

What Are Some Cool Facts About Venus Flytraps?