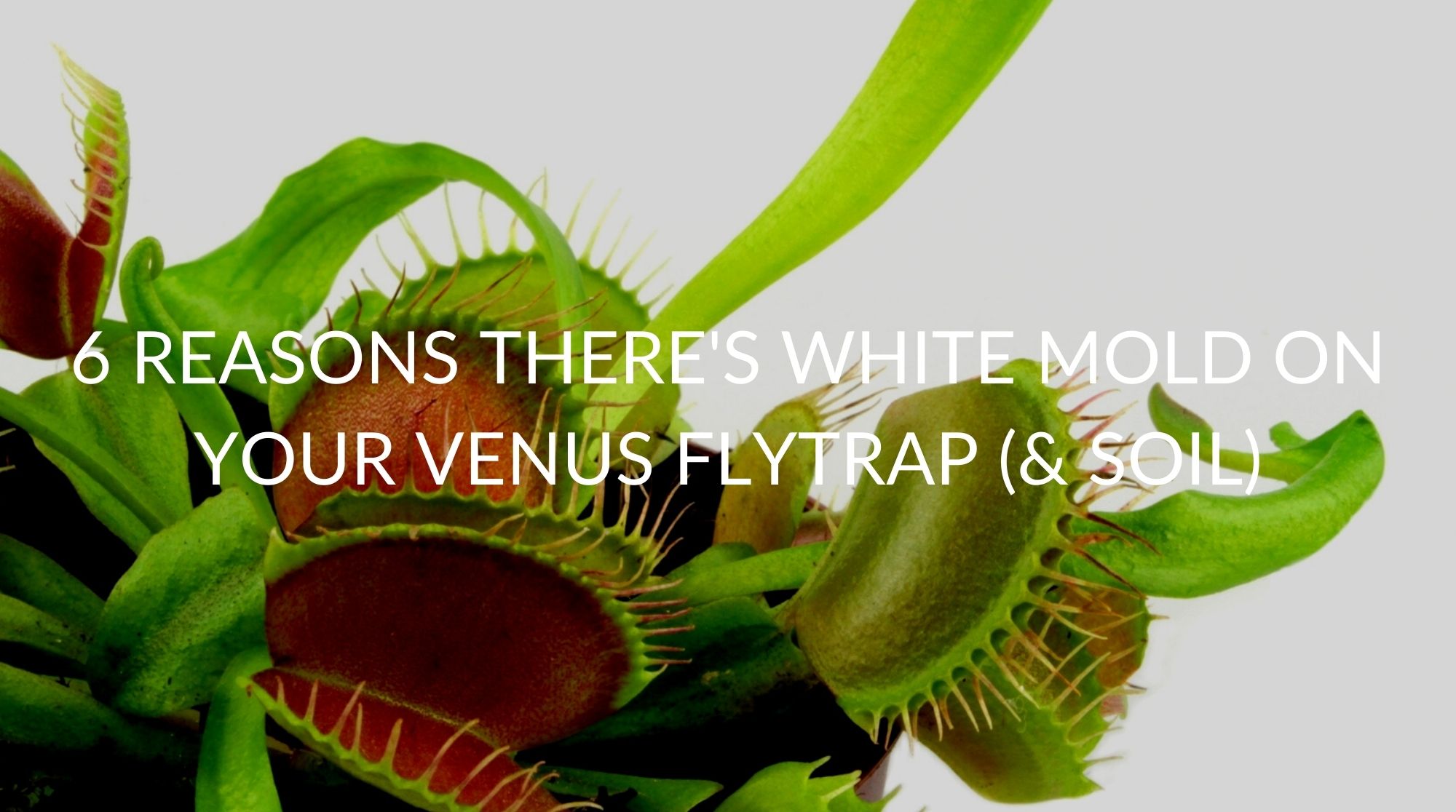 Seeing spots of white mold growing on the soil around your Venus flytrap or on the plant itself can be pretty disheartening, but where does it come from, and what should you do about it? While it is unlikely to kill your plant, white mold can affect how well it grows – and it can spread to your other houseplants too.

This article will give you all of the details about what to do when you have this issue with your Venus flytraps, why the white fungus is growing, what you can do to treat it, and how to prevent it from occurring in the first place.

Read ahead to find out everything that you need to know about the interesting and often frustrating white mold problem so that you’re equipped with the knowledge to better protect and care for your carnivorous little friend.

Why Is My Venus Flytrap Soil Getting White Mold?

The Venus flytrap, or Dionaea muscipula, is a beautiful and exciting plant for any keen gardener to grow, but they can be a little temperamental. Because the flytrap is native to the subtropical wetlands of the United States, it likes to have a good deal of moisture in the air, which can be tricky to manage indoors and in temperate climates.

Not enough moisture and your Venus flytrap is likely to start wilting and looking rather sorry for itself, but too much moisture and not enough light and white mold may start to grow. This particular white mold is a type of fungus that feeds on dead matter – and it thrives in damp soil.

So why is white mold growing in the soil around your flytrap?

Ultimately, the main reason why white mold grows on your soil is that it is damp, and there are several reasons why this may be the case. If you have recently repotted your flytrap or added new soil to it, the soil you used may have had too much moisture in it. Otherwise, several things commonly lead to damp soil.

Venus flytraps do need to be watered often, but if you are not leaving them enough time for the surface soil to dry out in between, it will start to grow mold. The top inch or two of soil in your flytrap’s pot should be dry before you water it again.

Venus flytraps like humid soil, but they don’t do well in soil that has become too saturated. You should never be adding enough water that a large amount collects beneath the pot. This will not only cause white mold to appear, but it can lead to root rot as well.

One of the main reasons that white mold starts to grow on the soil around Venus flytraps, in particular, is because of the high humidity that these plants like in the air around them. While some moisture is great, anything over around 70% humidity can stop the top layer of soil from drying out. Inconsistent manual misting will cause the same effect.

You may still see some white mold appearing in your soil even if you are giving your Venus flytrap just the right amount of water and humidity. This is usually because the soil is not drying properly, often when it is not receiving enough direct light. Sunlight, in particular, is not only healthy for your plant but also helps to keep your soil from becoming damp.

Just as with a lack of sunlight, cold temperatures can mean that the soil around your Venus flytrap isn’t drying. Venus flytraps like a temperature of between 70° – 95° F (21° – 35° C) in the summer, but in the winter, when it is colder and darker, you need to be extra cautious about the temperature and condition of your soil.

Why Are My Venus Flytrap Leaves Turning White?

If there are patches of white appearing on the leaves of your Venus flytrap, it may be mold growth that is spreading from the soil below. To make sure, check the texture of the white patches. If it’s mold, it will be slightly fuzzy and will be growing externally on the leaves.

If the leaves themselves are changing color, it is probable that there is a different cause, although white mold may be a contributing factor or symptom.

Below are some of the common color changes that you might see and what each one might mean for your plant.

What may look like whitening of the leaves of your Venus flytrap may actually be their natural color starting to fade. This indicates that your plant is not as healthy as it should be and is usually a result of light starvation. If your flytrap isn’t getting enough sunlight, the inside of the traps will turn green to focus on more photosynthesis.

Yellowing leaves is a common color change in Venus flytraps that is quite closely associated with white mold growth, as they often happen at the same time. Some of the leaves on your flytrap will turn yellow when they die naturally, but too many can mean that the plant is not growing correctly. This may be due to overwatering, using the wrong water source, or having incorrect soil.

Black leaves can seem worrying, but they are actually quite a normal part of a Venus flytrap’s growth cycle. They are particularly common when the plant is dormant during the winter months. Too many black leaves, however, can indicate stress or improper feeding.

Black Spots in the Bulb

If you see black spots in the root bulb of your Venus flytrap, it is a strong sign that your plant is experiencing root rot. This is a result of long-term excessive moisture and can occur in conjunction with a fungus, like white mold. Root rot is a plant killer, and it will need immediate attention.

Red Spots at the Base of the Leaves

Venus flytraps should have a red color inside their traps, but red at the base of the leaves means that something is wrong. Usually, your plant is being exposed to too much heat, and it is starting to damage the leaves.

A strong red color inside of your plant’s traps means that it has the right amount of light and is growing healthily. This is a good indicator that you’re doing the right things.

How Do I Get Rid Of White Mold On My Venus Flytrap?

Although white mold is unlikely to kill your flytrap itself, it can stop it from growing healthily and shows that your soil is too damp. If you’ve found this fuzzy fungus on your Venus flytrap, or in your soil, then there are a few things that you can do to get rid of it.

There are many fungicides on the market that you can spray onto the leaves of your plant, and onto the soil itself. These are generally effective as they kill off the cells of the white mold directly, but there are a lot of cheaper alternatives if you want to avoid the use of chemicals.

You can easily make your own natural fungicide using household ingredients. One tablespoon of baking soda in half a gallon of water, mixed with a ½ teaspoon of liquid soap, is an effective mixture that can be applied using a spray bottle. Two tablespoons of apple cider vinegar in a quart of water will also do the trick.

If there’s mold in your soil, manually taking away the moldy layer is a pretty easy first step. Once you’ve taken off the offending layer, you can top the pot back up again with dry, fresh soil.

Bright light can help to clear up white mold pretty quickly, particularly in direct sunlight. In a few days, or sometimes weeks, bright light will lower the moisture level and kill off the mold – and it’s good for your plant too. Just make sure that you are not exposing your plant to temperatures above 95° F.

The most extreme and effective solution to a white mold problem in your soil is repotting the plant entirely. Fresh, clean soil can give your Venus flytrap a new lease on life but do check that you are using the right kind.

How To Prevent Mold In Venus Flytraps

As with most gardening issues, prevention is a lot easier than treatment. When it comes to white mold, looking after your Venus flytrap properly is the best way to stop this problem from recurring.

The ultimate plant-care challenge is finding the right balance with your watering process. Investigate the soil to make sure that it has dried out sufficiently before you start watering. Once you’re finished, use your fingers to check that the top layer of soil is humid but not soaking wet.

A water tray is sometimes an easier way to water your Venus flytrap. If you water directly into the tray, it will soak into the soil but leave the top layer dry. To prevent root rot, you need to check that the tray itself is drying out completely. You will also need to reduce how much you are watering during the winter months when your flytrap is dormant.

There are many different devices that you can buy to monitor the humidity of your flytrap’s environment. 50-70% is a good target to aim for, and if you are getting readings about 80%, you might want to invest in a dehumidifier.

Direct light is a friend to most plants, and when it comes to white mold, it can be your savior. Even artificial light can often be the solution to a white mold problem, but sunlight is always the best at the job.

Use Soil with Good Drainage

Depending on the exact mixture of soil that you have, it may not be draining well enough, leading it to become waterlogged. Moss, sand, or perlite are good additions to your soil that will allow water to drain more easily, and they increase aeration as well.

Be Careful with Misting

Misting can be a good alternative to humid air, but make sure that you are doing it consistently. An automatic mister is a better choice than a manual mister as it is less likely to leave excessive moisture on the surface of the soil.

Once a year, your Venus flytrap could do with a new home. This will not only help with preventing white mold, but it will reduce the risk of rotting and other fungus issues – and you will probably notice better growth from your flytrap too.