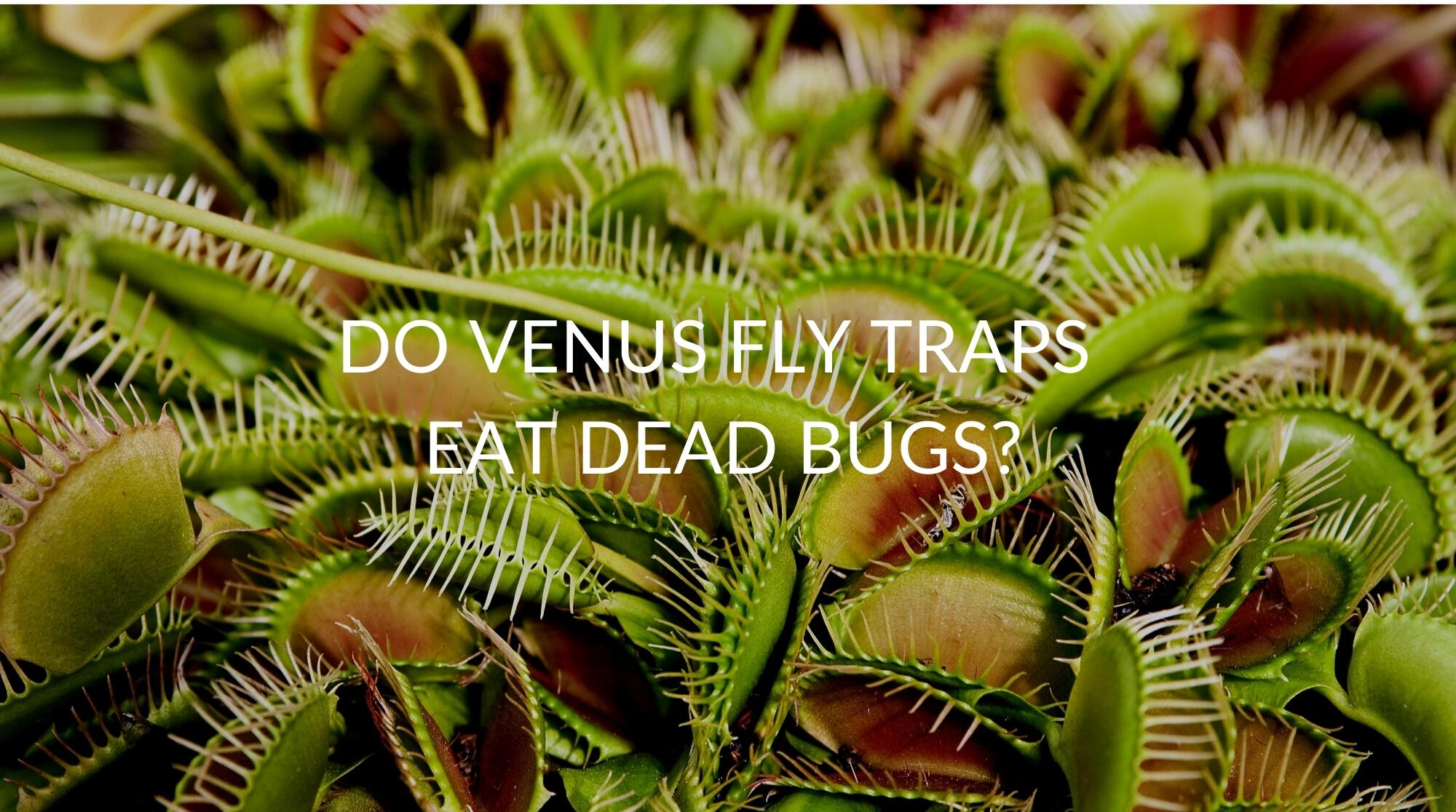 Venus flytraps are beautiful plants that can thrive when cared for well. When you’re growing Venus flytraps indoors, they require a little more attention than if they were to be living outside. You probably already know Venus flytraps require food, but do Venus flytraps eat dead bugs?

A Venus flytrap can eat dead bugs, but they definitely aren’t their favorite food. Furthermore, you’ll have to do some work in order to help the plant eat them. This isn’t difficult, and it really is quite fascinating to nurture a Venus fly trap’s intuitive nature when it comes to feeding time.

Venus flytraps can eat dead bugs, but they don’t do this naturally. This is because the little hairs inside the trap’s mouths have to be stimulated in order for them to close, and a dead bug will not cause that to happen.

Being that it’s quite possible for non-food items to fall into a Venus flytrap occasionally, the traps won’t immediately close entirely until they are sure it’s actually food inside. When a live bug, their typical food, is inside, they will try to wiggle free, letting the trap know that they have indeed caught a snack.

Since these plants are intuitive in this way, they will need some encouragement when you are feeding them a dead bug. It requires some work for them to break down and digest a bug, so they don’t want to expend that energy unless it’s necessary. When the trap does close all the way, your trap will appear to be dancing as they break down their food.

Can I Feed Dead Bugs To My Venus Fly Trap?

You can feed your Venus flytrap dead bugs, and they will still get the same required nutrition from them. However, you will have to help the trap consume it. This can be an effective way to get rid of bugs you might find in your home occasionally that have already passed.

Live bugs will sometimes try and escape the traps before they manage to close completely. Furthermore, some live bugs can actually eat their way out of a trap, which will cause the trap to degrade.

You can eliminate the risk of a live bug potentially breaking down your plant by choosing to use dead bugs. They are also, obviously, much easier to wrangle and get into the traps, as they cannot fight their way out.

How To Feed Dead Bugs To Venus Fly Traps

Feeding your Venus flytrap isn’t difficult, and it doesn’t need to be done that often. Feed one opened trap at a time, and don’t feed them in winter. They usually only need food about once or twice a month at the most.

Be Careful About Which Bugs You Pick

You don’t want to feed your Venus flytrap a bug that is too big. Ideally, the bug should be no bigger than one-third of the size of the trap. If you can stomach it, you can cut the bug up to make it smaller.

Look For Their Triggers

As previously mentioned, the traps have little hairs inside their traps that tell them when to close on their prey. You want to take note of where these are before you feed them because you’ll have to trigger them to make them work.

Place The Dead Bug Inside The Trap

You will probably want to use something to put the dead bug inside the trap, like tweezers. If you touch a trigger while you do this, it’s possible the trap might start to close. Otherwise, you’ll need to help the trap close.

You can gently rub the bug on the triggers for a few moments until you notice the trap start to close. At this point, you can remove the tweezers and watch the trap close. It usually takes a few minutes for the trap to close completely.

Help The Trap Close All The Way

Venus flytraps close in a couple of stages, but they might need help when it comes to eating a dead bug. When the trap is mostly closed, you can take your tweezers or fingers and very, very softly encourage them to close.

You can do this by squeezing the two sides of the trap gently together for about thirty seconds. It’s very important to avoid squeezing too hard. Continue this process until you see the trap close completely.

Keep An Eye On The Trap

Your traps have a way of letting you know whether or not the food option you gave them was suitable. If the bug was too big, it might start to rot because the enzymes within the trap couldn’t break it down well enough.

Venus flytraps are unique plants in that they don’t thrive because of their soil. They cannot absorb the nutrients in the soil, which is why fertilizer or nutritious soil is never recommended to grow them in. This is why feeding them occasionally can help them thrive and live longer.

It’s all in the name of this food option. Venus flytraps do, indeed, enjoy munching down on some flies. Just be sure that if you feed your plant flies manually, they aren’t too big for them to break down and eat.

Small crickets make an excellent meal for your Venus flytrap. You just want to be sure that they are small and that any antennas or legs still attached do not stick out of the trap. Even these tiny appendages could stop the trap from closing, and the bug will rot instead of being broken down and digested.

Venus flytraps can also eat small spiders. Once again, ensure they are small enough that their legs don’t stick out of their traps. Spiders are often attracted to the scent that a Venus flytrap emits.

If you don’t feel comfortable handling live bugs and cannot easily access dead ones, freeze-dried bugs are an inexpensive option to feed a Venus flytrap. Just be sure to rehydrate them with some distilled water before you give them to a trap.

Using tap water or any other type of water is strongly discouraged. Venus flytraps can only handle distilled or rainwater, so they don’t drown in unnecessary minerals.

With bugs being attracted to the sweet smell emitted from the Venus flytrap, it’s possible that you might find a dead bug in their trap every now and then. You might also see a carcass when your trap re-opens and wonder whether or not you should do anything about it.

Should I Remove Dead Bugs From My Venus Fly Trap?

You don’t have to remove dead bugs from a trap, but you can. If you are able to catch the dead bug shortly after the Venus flytrap opens, it should slip out easily with tweezers without the trap closing. Making the traps close too often will cause them to die prematurely.

If the bug is dried up, you should spray a small amount of water in the trap’s mouth to loosen up the dead bug, then gently and slowly pick it up with tweezers. The rain will usually wash dead bugs away from a Venus flytrap that lives outside.

Can I Feed Dead Bugs From Around My House To Venus Fly Traps?

Bugs inevitably find their way into every home, so you’re bound to find a dead one occasionally in yours. As long as you don’t kill them with bug spray or other chemicals, they should be safe to feed to your Venus flytrap if they are small enough.

Technically, these plants don’t have to eat bugs to stay alive, but the nutrients from bugs help keep them alive for longer. It’s harder for these plants to get the right light when indoors, so feeding them bugs, either dead or alive, is strongly recommended to help them thrive.

Eventually, the traps will naturally wither and die, but if the plant has enough nutrients, new traps will grow in their place.

Choosing to bring a Venus flytrap into your home means you’ll have to put in some effort to keep it alive, much more than other plants. However, these plants make very gorgeous and unique additions to any home.

They can also sometimes help either deter or eliminate that occasional bug that gets into your home. If you don’t feel comfortable feeding live bugs, you can give them dead bugs by helping encourage their natural digestion process.