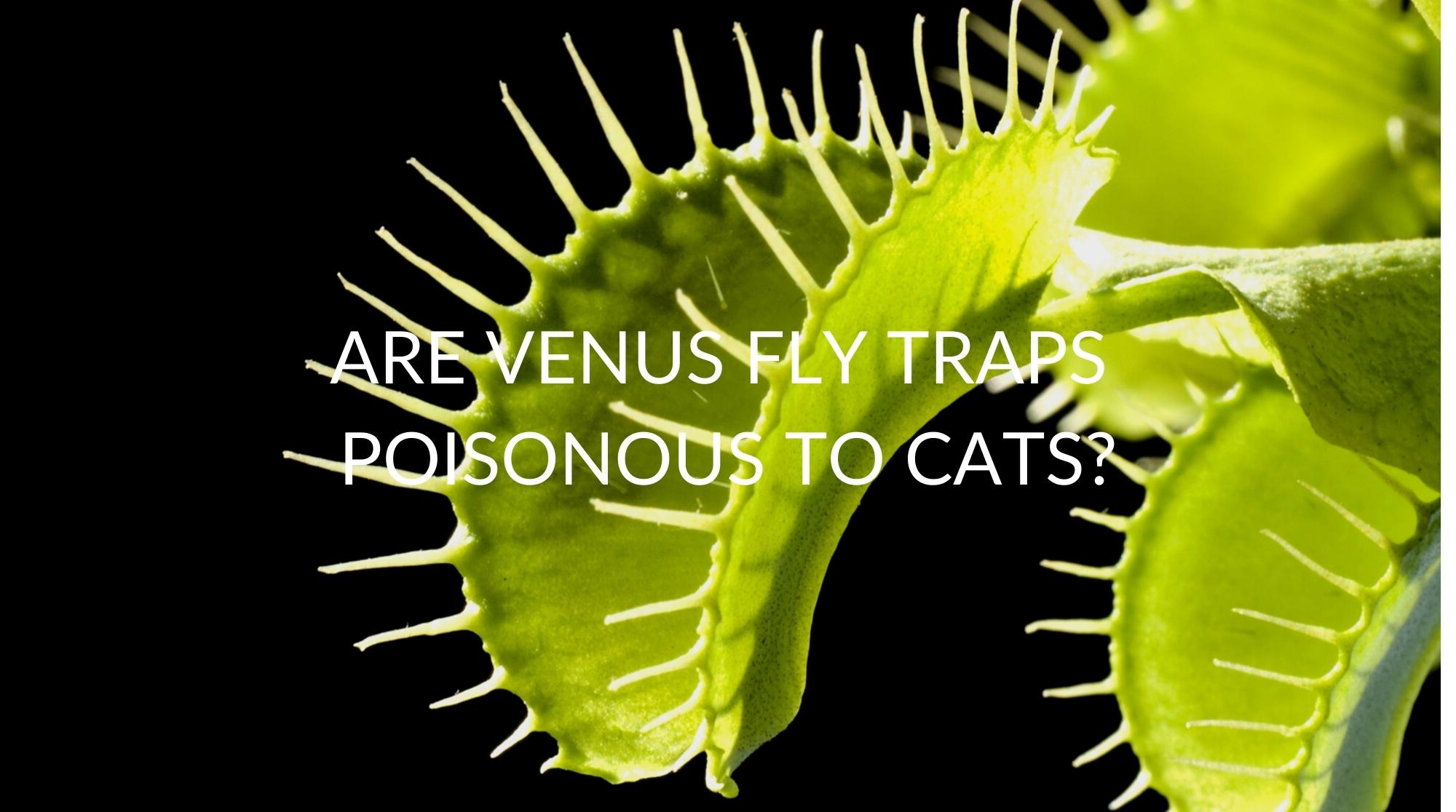 A lot of people have taken an interest in carnivorous plants, with the Venus flytrap being one of the most popular varieties. Cat owners always need to be cautious about what types of plants they bring home because felines are naturally curious about plants. Most cat owners have difficulties keeping their furry friends away from the indoor plants they buy, so it’s important that they only bring certain plants home.

On this page, we’re going to discuss if Venus flytraps are poisonous to cats. We’re going to let pet owners know what’s really in store for them when they bring one of these plants home. Keep reading to learn more.

Are Venus Fly Traps A Danger To My Pets?

First off, if you have a cat or small dog, you may be wondering if a Venus flytrap is a threat to them. The last thing you want is a plant that tries to chomp on your pet.

Before your mind starts to create a horror story, you don’t have to worry about what a Venus flytrap will do to your pet. Venus flytraps don’t capture small animals. In fact, they can only capture something that fits in their traps. These plants will usually be smaller than your pet, as they only grow to be 5 or 6 inches tall on average.

The traps to these plants are only 1.5 inches. They work best when capturing something that is 1/3 of the trap’s size. This is one of the reasons why they only eat insects.

A Venus flytrap is able to attract bugs by using sweet nectar that is poisonous to them. However, this same nectar is non-toxic to cats. If your cat were to nibble off a piece of the Venus flytrap plant, there are no toxic substances to make them sick. This is why the Venus flytrap is considered a safe indoor plant for cat owners.

Your cat will likely do more harm to the Venus flytrap than the plant could do to it. This is why it’s important to keep the plant in an area where the cat won’t be able to get at it. While a nibble may not do too much damage, it could affect how the plant grows if your cat takes bites too often.

Can A Venus Fly Trap Kill A Cat?

There have been no cases of a Venus flytrap killing or harming a cat. Most cats are larger than the Venus flytrap, so their bodies aren’t able to trigger the plant. If your cat is nearby the plant or touches it, the plant won’t react by snapping at them.

In fact, the only way for a Venus flytrap to capture something is if the hairs in its trap are triggered. This is why they eat insects because as the insects are moving around the trap getting nectar, they brush up against the hairs. The hairs need to be triggered two times in a row in order to trap something.

A cat is too big to get into the Venus fly trap’s trap to properly trigger it. Even kittens or smaller furry critters are too big to get trapped by one of these carnivorous plants. If a cat were to stick its paw in the plant’s trap, it wouldn’t get hurt either. The jaws of the plant are very weak and will not inflict pain on a cat.

How To Keep Your Venus Flytrap Safe From A Cat

One thing you should know before bringing a Venus fly plant home is that they are fragile plants. If you have a curious cat, they could do a lot of harm to the plant. Let’s take a look at some of the things you can do to keep your Venus flytrap safe from cats.

There are certain fragrances that cats hate, so you may need to bring out the essential oils and make a cat repellent. Some scents that are safe for plants but are hated by cats are lavender and citrus (lemon, lime, orange, grapefruit).

Cayenne pepper or chili powder are also known for keeping cats away, but using spicy products isn’t the best idea. If your cat is curious and gets into the pepper, it could hurt its eyes and nose.

Has your cat caused damage to indoor plants by urinating in the pots? Even if your cat doesn’t use potted plants as an alternative litter box, it is likely still curious about digging the soil.

This can easily be stopped by adding a layer of pebbles on top. Additionally, pinecones, seashells, or sea glass will work as well. However, don’t pack the layer in too tightly, or else water won’t be able to flow through properly.

Out of Sight, Out of Mind

Your cat can’t harm a Venus flytrap if they aren’t able to get at it. Do an inspection of your living space and see what areas allow good sunlight but are also safe from the cat.

Some cats are persistent, so the answer to the statement above could be nowhere for some pet parents. This doesn’t mean you are out of luck. You may have to purchase some containers or baskets that can be mounted to the wall or hung from the ceiling.

Cats love to chomp on plants, so why not grow a plant for that specific reason? A great way to keep your cats from biting on your plants is to distract them with one they enjoy more. Cat grass and catnip are favorites, but cats also enjoy mint and thyme. There are plenty of safe plants to chew on that your cat will enjoy more than a Venus flytrap.

One of the top reasons a cat is drawn to a houseplant is because they want to use the soil as their own personal toilet. If their litter box is too dirty, they will find other places to do the deed.

You wouldn’t want to go to the washroom on a toilet that wasn’t cleaned, and your cat isn’t much different. Cleaning its litter more often can stop it from using your plant’s soil as a litter box.

Scary stories have painted carnivorous plants out to be monsters that are a danger to small animals. In reality, Venus flytraps aren’t big or strong enough to inflict any damage on a cat or other small pet.

Even if a curious cat were to touch the inside of the plant’s trap, the Venus flytrap is not strong enough to hurt them. Most plants have traps that are only 1.5 inches big, which is much smaller than a kitten.