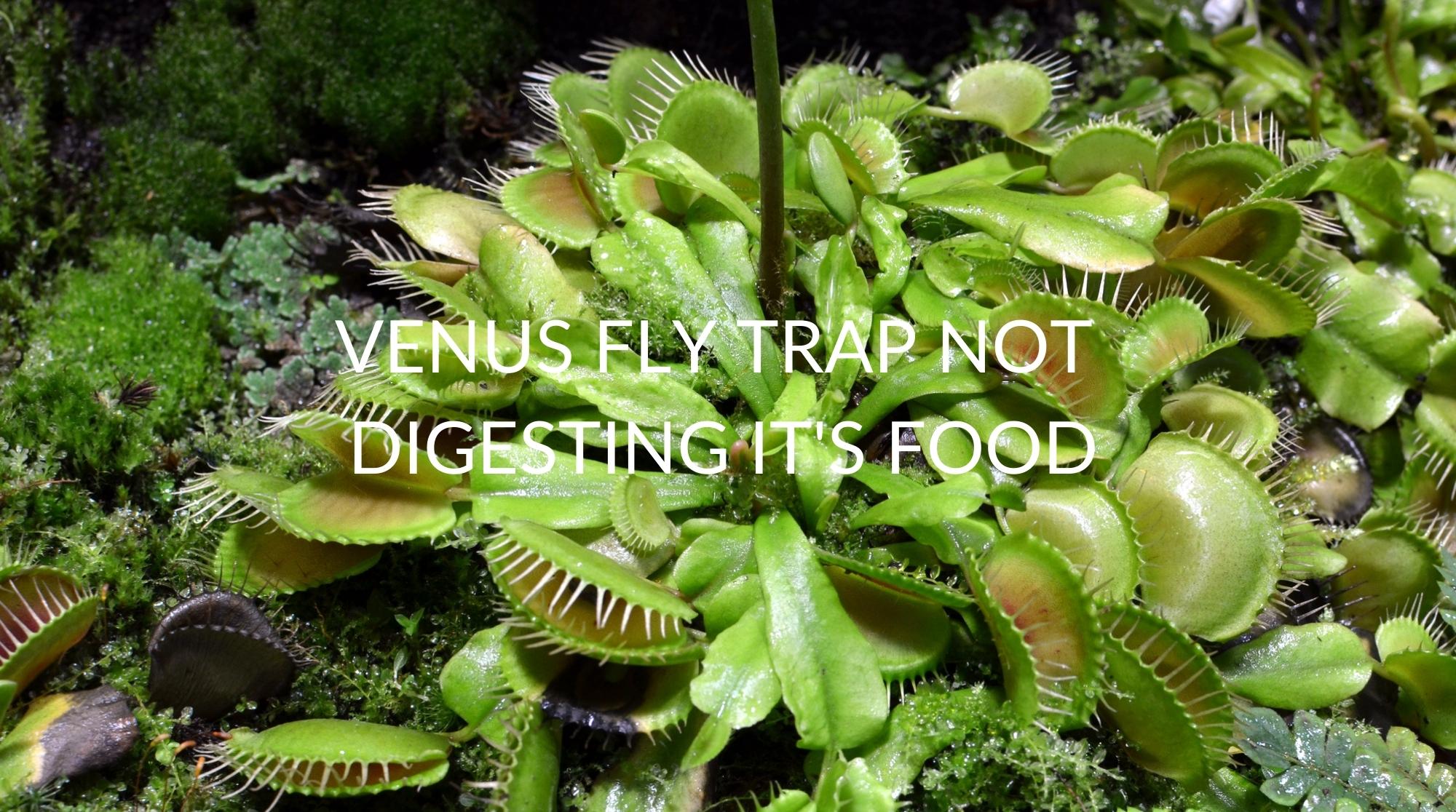 These plants struggle to digest their food for many reasons, such as lack of calcium in their diet, an inability to produce enough enzymes, and many other reasons. Without digestive gland activation, the Venus flytraps do not produce enough enzymes to break down the insects. This means that the lack of enzymes is extremely problematic.

Continue reading to learn more about Venus flytrap digestion and why they may not digest food. After determining the issue, use the proper suggestions to identify methods for promoting the digestion of your Venus flytrap.

How Does The Venus Flytrap Digest Flies?

Venus flytraps lure flies onto their large leaves using a sweet-smelling aroma then trap the prey inside their airtight compression chamber. After trapping the flies, the flytrap produces enzymes that decompose the insect slowly over seven to ten days.

Various things can trigger the Venus flytrap to attack its prey.

Triggers to the Venus flytrap prey include:

If the insect lands on the trap without triggering the sensory hairs, then the insect has hope of escape. Otherwise, Venus flytraps do not reopen after it seals themselves shut. A Venus flytrap may reopen within a day or less after noticing the object is it attaching to is inedible. For instance, twigs, pebbles, other bushels, and more. However, if the sensory glands are triggered, they will attack their prey.

How Long Does It Take For Venus Flytrap To Digest?

Furthermore, the flytrap’s life quality can significantly impact how well and quickly it digests its food. If an insect lands on the leaf but does not trigger the trap, the Venus flytrap will not engage in the digestion process at all. At that point, the Venus flytrap waits for a second movement to trigger.

The Venus flytrap remains in a suspended state for one hour, allowing smaller insects to escape if needed. After the allotted hour has passed, the mouth-like bulb clasps shut and begins the digestion process. The trap compresses shut and begins to dissolve the bugs. The trap will reopen by the end of the first week, and only the insect’s exoskeleton will remain. Meanwhile, the plant absorbs the nutrients.

Why Is My Venus Flytrap Not Digesting?

Venus flytraps may not digest insects for many reasons, like a lack of calcium or the inability to clasp their leaves shut. There are many reasons a Venus flytrap would have issues digesting its food.

You must evaluate the reason for your plant’s digestion issues before you can fix them. The easiest way to identify the issue is by observing your plant during their regular feeding time or at the regular time of day they usually feed. Watch them closely and see if you can identify any direct signs of why your Venus flytrap is not digesting its food.

When there is not enough calcium in your Venus flytrap’s diet, it cannot digest insects properly. A calcium deficiency results in the inability to secrete natural oils like enzymes. The enzymes are primarily responsible for the digestion of insects. Many enzymes must be secreted for the Venus flytrap to properly decompose an insect.

Something is stuck in its prawns

A venus flytrap may be incapable of digesting if something is stuck in its leaves. Its inability to clasp its leaves shut prevents it from secreting enough enzymes to digest insects like flies, moths, and other insects properly. The most common things that get stuck in its trap are twigs, branches, pebbles, trash, and more.

A lack of enzymes

A Venus flytrap whose sensory hairs are not activated promptly after a bug enters its trap will not catch food. Therefore, they will be unable to digest their food properly. It may close after the bug is gone, too, if the sensory hairs are disoriented.

The insects are the wrong size

Size is an important consideration to Venus flytrap digestion because something too large or too small may not be digestible by the small plant. When spiders and bugs are too large, they can easily escape before the Venus flytrap fully closes its trap. Similarly, small insects, like ladybugs and mites, can easily escape through the grates at the top of the flytrap within the first hour.

When your venus flytrap is not digesting or closing, there are many things that you can do. First, you must determine what is causing your problems. Give your plant an overall visual evaluation and observe any physical abnormalities, especially inedible objects stuck in its trap.

You can promote Venus flytrap digestion by using several short-term and long-term solutions, depending on the severity of your issue. The methods vary from increasing the calcium levels of your fertilizer and replanting your plant to dislodging items and more.

Use fertilizer to increase digestion

Using a calcium-rich fertilizer aids Venus flytrap digestion because it promotes enzyme formation. You can purchase fertilizer for under $20 at any gardening store or supermarket. When you use a health-conscious fertilizer, you are more aware of your plant’s digestive needs.

If your Venus flytrap is struggling to digest insects, you may need to replant it in calcium-rich soil to promote positive plant growth. Replanting your Venus flytrap is one of the last measures to try if your plant has digestive issues. When replanting, choose high-calcium, nitrogen-rich soil, and fertilizer!

Evaluate the size of the insects you have been feeding your Venus flytrap and reconsider their diet if it is not appropriate. A Venus flytrap will not digest small bugs because it takes more calories to consume them than they have. Feed your Venus flytrap large insects like moths and crickets to increase the calorie count.

The best way to encourage your Venus flytrap to fully close is to remove anything that might be preventing the trap from closing. Twigs, pebbles, and other small items can get lodged and prevent your flytrap from digesting its food.

If you see these items, gently remove them from your Venus flytrap’s trap. Be fragile with its leaves as you maneuver the item out from inside your plant.

Self-activate the sensory hairs inside the sensory glands to engage the trap. Gently brush something against the hairs and watch the trap snap shut to self-activate. There are only thirty seconds between the first time the insect touches its first sensory hair and signals the trap closed.

Remember, Venus flytraps only reopen roughly ten times. Never force them to open and close, or you can permanently exhaust the sensors.

Small bugs have only one or two hours to escape before the carnivorous flytrap plant fully locks its jaw. After the first hour, the jaws will lock in place and begin secreting fluid to dissolve the insects. During this phase, they begin to absorb the nutrients directly from the insects.

Suppose your plant is having trouble digesting its food. In that case, you will need to uncover the reason for the digestion issues. You can intervene by integrating fertilizers and calcium-rich soils. You may also need to remove items from its mouth, like twigs and small rocks. There are many digestion solutions.