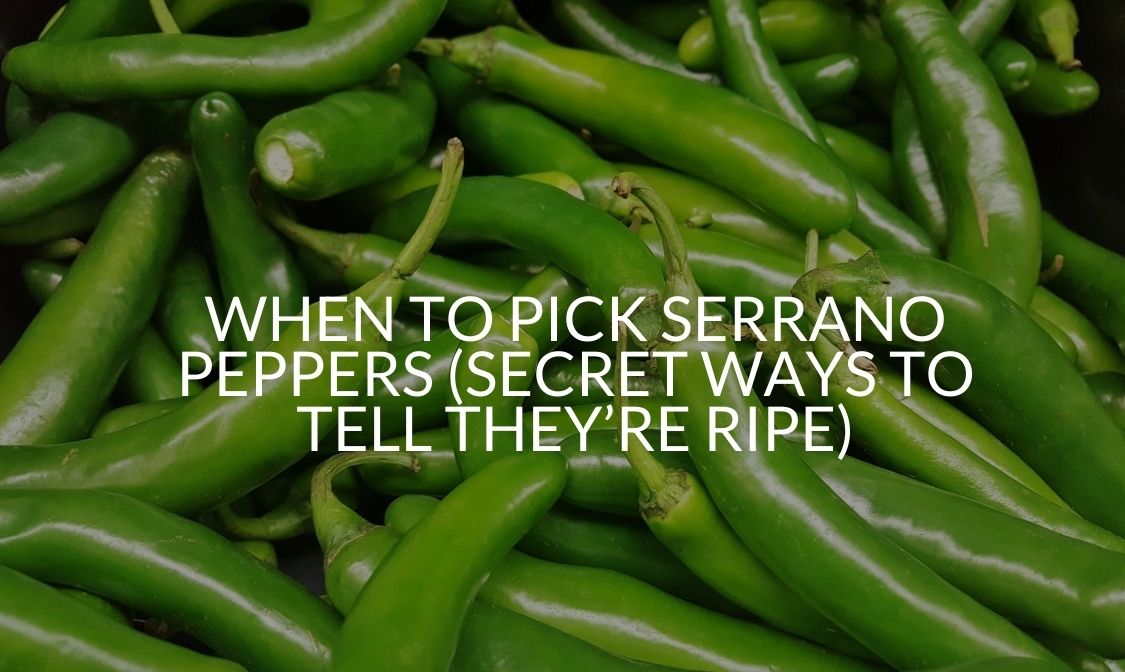 You’ve put the time in, and now you’re wondering when it’s time to harvest! This article is going to tell you exactly when to pick Serrano peppers, as well as what you can do if you pick them too early and what happens if you leave them too late.

So keep reading to find out everything you need to know!

When To Pick Serrano Peppers

When you should pick your Serrano peppers not only depends on the type of Serrano pepper you’re growing but also how hot you want them to be.

However, as a general rule of thumb, most serrano peppers should be picked between 70-80 days.

If you leave it longer than this, they may begin to rot on the stem, and if you pick them too early, then they may not be ripe enough yet.

How Can You Tell When Serrano Peppers Are Ripe?

The Color Is A Good Indicator

The mildest Serrano peppers are the green ones, and these are in the earliest stages of growth. At this stage, they’re definitely edible, and they’re going to be best for you if you don’t like anything too spicy.

If you want something a little bit spicier, then you may be better off eating the pepper when it’s orange or yellow. At this point, it will have much more of a kick, but it still won’t be at its hottest.

And when it’s most mature, you’ll notice that your Serrano peppers are red or brown. At this point, they’re going to be much hotter than jalapenos, so if you don’t like spice, you may wish to avoid eating them at this phase.

The size of a Serrano Pepper is actually one of the best indicators of when they’re ready to be eaten. At two to three inches in size, they’re going to be ready for harvesting and eating.

However, many people wait until they’re between three to four inches before they harvest them, as well as half an inch wide.

Just like the color, though, you can also determine the spiciness of your Serrano peppers based on how hot they are. The smaller the pepper, the hotter it’s going to be.

Curious why your Serrano Peppers are not spicy? Click here to find out why!

The thickness of the skin is also going to determine when you’re going to want to pick your Serrano Peppers. If you plan on making salsa or want some crunch in your peppers, then it’s best to pick them when the skin is thicker.

However, if you’re looking for peppers that are easier to prepare, then it’s often best to pick them when the skin is still thin.

If you’re growing your Serrano peppers outside, then you may wish to pick them depending on the temperature. Serrano peppers and all other peppers produce the best harvest during warm weather.

So if you know that winter is coming, it can be a good idea to harvest the remaining Serrano peppers. Failing that, you can also bring your Serrano pepper plant indoors, where it will continue to produce peppers all year round.

They’ll Come Off The Plant Easily

Another tell-tale sign that your Serrano peppers are ready is that they’ll come off the plant extremely easily. In fact, a gentle tug might be all it takes to remove it from the stem.

You May Notice Brown Stripes

Lastly, you may notice brown stripes on your peppers as well. When you see them, no matter the size or color of your peppers, it means they’re ripe and ready to be picked.

If you don’t pick them, then they may end up falling off or beginning to rot.

When Is The Earliest Time You Can Pick A Serrano Pepper?

To be honest, you’ll be able to pick a Serrano pepper and eat it as soon as you see them. However, in the early days, they’re going to be extremely mild, and it’s better to leave them to grow a bit longer.

As a rule of thumb, you shouldn’t pick your Serrano peppers until 60 days after they’ve germinated. At this point, you’re going to have mild green peppers.

Wondering why your Serrano Peppers are turning red? Click here!

If you’ve picked a Serrano pepper before it’s ripe, it can still be salvageable. One of the best things you can do is leave it somewhere that gets lots of sun. If it gets enough sun everyday, it will continue to ripen until it’s nice and green. Unfortunately, though, it may not redden.

What’s The Latest You Should Pick Serrano Peppers?

Generally speaking, you should harvest you can harvest Serrano peppers up to 100 days after they’ve sprouted. At this point, they should be red or brown, and they’ll also be a lot hotter than the green variety.

If you don’t harvest your Serrano peppers in time, a couple of things are likely to happen. First of all, you may notice that the peppers are dropping off your plant. This is a clear sign that they’re ready to be harvested, and if you notice a few dropping off the plant, you should also check the rest as well.

In some cases, if they’re left too long, you may also notice that the Serrano peppers are beginning to rot on the plant as well. Obviously, these ones should be removed as soon as possible.

If you want to get the most from your plant, you should pick them as often as possible. Sometimes it’s a good idea to pick some while they’re green just so you can get a bigger harvest later on.

How Do You Harvest Serrano Peppers?

Harvesting Serrano peppers isn’t as easy as you think, and you definitely shouldn’t yank them off your plant. If you do this, you could end up damaging the stems.

Now you should have a better understanding of the ideal time to pick Serrano peppers, as well as what happens when you leave them too long or pick them too early.

As you can see, they’re pretty easy-going plants, and you’ve got a wide window of time to pick them. However, if you want to get the most out of your plant, you should be picking them frequently.

If you liked this article, make sure you check out the rest of the website. Otherwise, have a great day!