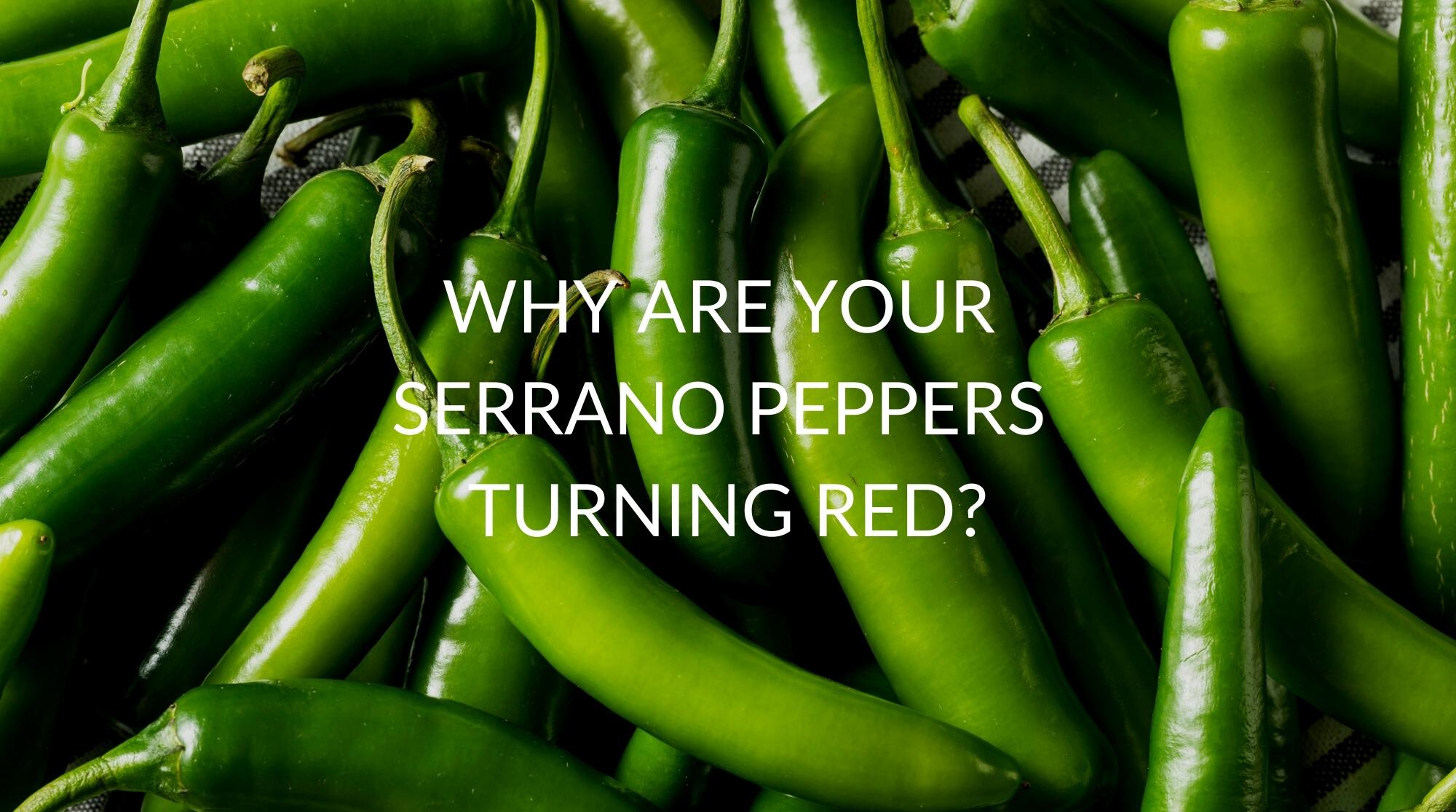 When a pepper becomes ripe, it becomes dark red. Serranos will become darker the longer you let them grow naturally. Vine growing also assists in spiciness and flavorful foods.

Your serrano pepper should be ready to harvest after roughly sixty days of growing. However, at around seventy to ninety days, you may notice they will begin to redden. Whether you leave them on the vine or not, a serrano pepper will turn red because of the reaction to the sun.

The remainder of this article will discuss the reason why serrano peppers are turning red, how long it takes for them to become red, and what it means when a serrano pepper turns red.

Why Are Your Serrano Peppers Turning Red?

The main reason that serrano peppers turn red is that they are at the end of their ripening process. The ripening process changes the color, texture, and taste of your pepper. The pepper should be dark red by the time it is finished ripening.

The serrano pepper should go through a drastic color-changing process as it ripens. The initial color of serrano peppers is green, slowly changing to a dark red color as the flavor develops.

Serrano peppers ripen as time passes. You may pluck the serrano pepper from the vine when it is green and let it age. Or, you can keep the pepper on the vine until it is red.

Typically, a pepper that is growing red means that it is becoming spicier. Red peppers are more flavorful than green, yellow, or orange peppers. If a pepper you have left in the sunlight is turning red, it is gaining additional nutrients that are changing its color, not its flavor.

Exposure to sunlight can cause your serrano peppers to turn red

If your Serrano Peppers are turning black, however, it may be a sign of something else.  Click here to find out what it means!

If you harvested your serrano peppers when they were green, leaving them in the sunlight can cause them to redden. The redness is a natural reaction to the sun.

It can take around seventy to ninety days for a serrano pepper to ripen on the vine and turn from green to red. If you let the serrano peppers fully ripen on the vines, they will become spicy and flavorful. However, you can also harvest them while they are green at roughly sixty days and let them ripen off the vine.

Serrano peppers ripened on the vine take longer, but they are more flavorful. You can ripen green serrano peppers into red peppers off the vine. However, these peppers are not spicy and do not have the same flavor as a vine-grown serrano pepper.

Curious why your Serrano Peppers are not spicy? Click here to find out why!

Serrano peppers will typically get progressively redder the hotter they become. If the serrano pepper is grown on a vine, the redness represents spiciness.

When picked from the vine while green, serrano peppers are relatively sweet. But, as it is left to ripen until it is dark red, the nutrients it receives within the additional few weeks create a drastic flavor change. The serrano pepper becomes dark red and is extremely spicy.

If the pepper’s color changes off the vine, the flavor will not alter much. Green peppers are sweet and cannot gain much flavor if they are not on the vine. They can be placed on a windowsill for a week or less to gain more color. However, they do not undergo a significant flavor alteration like they would on a vine.

In short, serrano peppers will only get hotter when they turn red on the vine. Otherwise, the redness will be a result of photosynthesis. It is their natural reaction to the sun.

Will Peppers Turn Red After Picking?

Peppers will turn red after picking if you place them on a windowsill. Exposing your green peppers to sunlight turns the peppers red, but it will not make them spicy.

You can harvest serrano peppers after around sixty days when they are around four inches long. Ripening serrano peppers off the vine requires sunlight from a windowsill. It will not make the peppers as spicy as it would by leaving them on the vine.

For a more flavorful pepper, you should leave the serrano pepper on the vine for at least seventy days until you notice brown stripes. Brown strips along the sides of your pepper indicate the interior of your pepper is full of flavor.