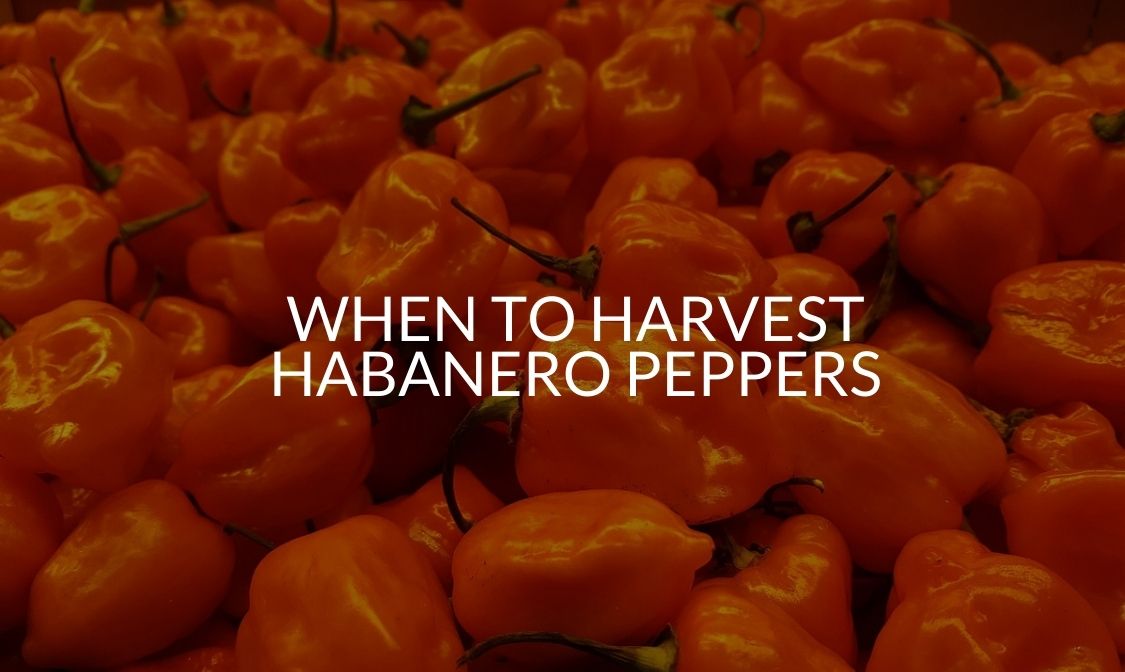 Habanero peppers are a great pepper to grow for beginners and experts alike. However, with all the different kinds of habanero peppers, it can be difficult to know exactly when to harvest them.

In this article not only are you going to find out the simple rule of when to harvest habanero peppers, but you’ll also learn the different harvest times, as well as what happens if you harvest them too early or too late!

So keep reading to find out everything you need to know!

When Should You Havest Habanero Peppers?

The time you should harvest habanero’s varies depending on the type you’re growing. Generally speaking you should be able to harvest your habaneros between 90-120 days after they’ve sprouted. If you’re planting them from seed then it may take an additional two weeks before you can harvest them.

7 Popular Habaneros And Their Harvest Time

Because there are so many different types of habanero, it’s no surprise that they all have different harvesting times. Here are some popular habanero peppers, as well as how long it’s going to take for them to ripen, and what to look for!

One of the most common and widely used habanero is the Orange Habanero. They grow around 1-2½” in size and take about 110 days to ripen from harvest.

You can tell when they’re ripe because they’ll become bright orange and their skin will look waxy and smooth. If you peel the thin skin you’ll notice they’re pale orange and yellow, and the seeds inside will be a creamy color.

Taste-wise you may notice that orange habaneros are sweet and fruity while still maintaining the intense heat of a habanero.

One way you can tell red habaneros are ripe is when you notice their skin has many folds and creases on it’s surface and it’s turned a deep red. Just like with orange habaneros you’ll notice the seeds of a red habanero are also going to be creamy.

Yucatan White Habaneros another great choice, however, they do take a little bit longer to grow. You can expect Yucatan White habaneros to grow 1″- 2½ in size and be ready to harvest after 110 days

Wondering about the right pot size for your Habanero plant? Read the answers here! .

These peppers can grow much smaller than other habaneros, and they’ll also be white, wrinkly, and jelly bean-shaped when fully grown. As well as this, when the plant matures you’ll notice that it also produces cream-colored flowers.

Once holding the world record for hottest habanero, this definitely isn’t one to be trifled with. It grows about 2″ inches in size and grows in roughly 90 days.

Red Savina’s are dark red in color, wrinkly and look like a Chinese lantern. If you’re going to grow them with caution. They are hot chili’s and not for the faint-hearted.

Jamaican Chocolate habaneros are another great choice and you can expect them to grow between 1½”-2″ in size as well as being ready to harvest in about 100 days.

As you can guess from the name, they’re going to be chocolate brown in color once they’ve ripened and you can expect them to look wrinkly. In fact, some people think they look similar to large prunes when they’re ready.

Hot paper lantern habaneros are quite large growing up to 3″ in length and taking about 90 days to grow from the day they’ve been transplanted.

Big Sun habanero’s grow anywhere from 2″-2½” in size and take around about 90 days to grow. Once they are matured you’ll notice they’re a beautiful golden color, and the insides won’t have as many seeds as other cultivars.

How Can You Tell When Habaneros Are Ripe?

Fortunately, there are a few different ways you’ll be able to tell when habaneros are ripe. Of course the easiest way is making a note of when you first transplanted them, but that will only give you a rough idea. After all, some plants grow faster than others.

So here are some other great ways you can figure out the perfect time to pick your habanero’s!

Of coure, the easiest way you can spot when a habanero is done depends on it’s color. Once your harbanero has changed to the color it’s supposed to be then it’s a clear sign it’s done.

But this doesn’t mean that you can’t eat them beforehand. The moment a habanero has become green that means it’s ripe enough to eat. In fact, if you don’t enjoy overly spicy peppers, then it may be better for you to eat them at this point. When they’re green they’re not going to be as spicy.

The second biggest indicator to show that your habanero is ready to be picked is it’s size. Once they’ve reached their recommended size then it’s the ideal time to pick them.

But if you want an EVEN spicier habanero, you can pick them before their fully grown. When you do this the spiciness is going to be more concentrated making them hotter.

They Come Off The Plant Easily

You’ll also notice that when a habanero is ready to be picked it will come off the plant incredibly easily. In fact, sometimes they might just fall off. If you notice one or two habaneros are coming off the plant with ease then give the rest a tug.

But make sure you don’t tug them too hard. Doing this could end up causing damage to the plant. If they can’t be tugged off use a pair of scissors or a knife to cut them.

Brown lines appearing up your habaneros is another clear sign that they’re ready to be picked. In fact, no matter the size or color, once you see the brown lines going up the side of your fruit it’s time to pick them.

When Is The Earliest Time You Can Pick Habaneros?

Generally speaking you can normally pick all habaneros around the 75 day mark. However, of course this depends on the individual plant as well as the cultivar your growing.

Asides from this, you should avoid picking the habaneros before they’re green. Anything before this and they’re simply not going to be ripe enough to eat.

Fortunately, if you do pick a habanero before it’s ripe it’s not the end of the world. Simply place it somewhere it’s going to get a lot of sun and warmth and it should continue to ripen!

When’s The Latest You Should Pick Habanero Peppers?

Generally speaking you shouldn’t pick habanero peppers too much later after they’re recommended harvesting time. If you leave it too long, then they may begin to lose their potency, fall off the stem or even begin to rot and wilt while still attached to the plant.

If you notice that any of these things are starting to happen then remove them from the plant ASAP and check the rest of the peppers as well.

Another reason that you want to make sure you’re picking your habaneros is because it helps the rest grow. If you don’t pick them often then you’re not going to get as big a harvest.

How Do You Harvest Habaneros?

If your habaneros don’t come off the stem extremely easily then don’t force them. When you force them you’ll more than likely end up damaging the plant which could ruin all your hard work.

Instead use a knife or a pair of scissors to remove them, making sure you’re gentle with the stem.

And if you do plan on picking them try not to touch them with your bare hands. This isn’t for the plant but for you. The oils on the skin of habaneros is still spicy and if you get it in your eyes it’s going to be extremely unpleasant.

Habanero’s are fun chilli’s to grow which definitely pack a punch. If you’re going to grow them make sure you know which variety you’ve purchased and the general harvesting time.

If you’re not sure when they’re ready to harvest then look at the size and color. As well as this you can also look for brown stripes running up their sides and test how easily they can be pulled off the stem.

And finally, if you liked this article make sure you check out the rest of the website. Otherwise have a great day!