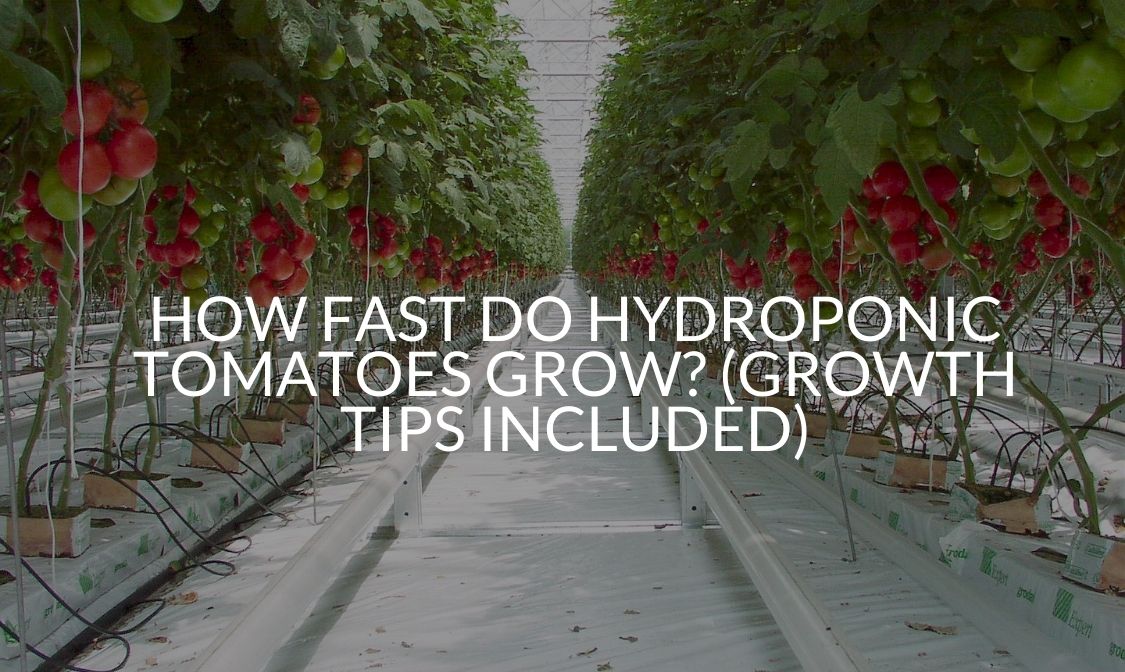 If you’re wondering “how fast do hydroponic tomatoes grow” then you’ve come to the right place. As well as finding out how fast they grow, you’ll also learn the following: the best hydroponic setup for growth, what makes tomatoes grow faster, and what the best type of tomato is to grow!

So keep reading to find out!

How Fast Do Hydroponic Tomatoes Grow?

Long story short, you’ll be able to harvest hydroponic tomatoes within 60 days of planting them. However, if you’re growing them hydroponically, you have much more control over their environment and it is possible to grow them faster!

So within the first 5-10 days you can expect your hydroponic tomatoes to germinate and sprout. After 4-6 weeks you’ll begin to notice rapid growth of the plant. And by the two month mark you should be able to begin harvesting the fruit.

What Type Of Tomato Grows Fastest?

There are two main types of plant you’re going to grow when you start growing tomatoes these are bush (determinate) or vining (indeterminate).

If you only have a small amount of space to grow your tomatoes then you’re better off growing bush tomatoes as they’re not going to grow nearly as big, and they’re growth rates tend to slow down rapidly after they’ve started bearing fruit.

In fact, it’s very rare for bush plants to grow more than 4 feet in size. And even then they typically tend to grow outwards and not up.

The only downside with determinate tomatoes is that they’re often more difficult to prune. Because they’re in a bush rather than on the vine, you may not be able to distinguish as easy the best parts of the plant.

The benefit of vining plants is that as you can guess, they’re going to grow in vines. This means you can find the vines that are producing the best fruit, and then prune the vines which aren’t. As well as this, they’re always going to grow tomatoes, and they’ll be able to grow and grow.

Which Varieties Should You Go For?

Because there are so many different varieties of plants to choose from it can be difficult to know which ones are best. So if you’re a beginner you should stick to the following.

What Hydroponic Setup Is Fastest?

The good news is the hydroponic setup you use isn’t going to effect the growth rate of your tomatoes too much. However, it will masisively effect how many tomotoes you can grow in a certain amount of space.

If you’re aiming to grow as many tomatoes as possible as fast as possible, then you’re going to need to pick the right hydroponic setup.

A Nutrient Film Technique Setup is probably your best bet if you’re just starting out, however, with both types of tomato, especially vining tomatoes, you’re going to want to make sure you’re using a trellis to give the plant something to climb up.

If you don’t have a trellis setup, then your tomato plant is going to have a very hard time supporting itself and may not grow properly.

The main benefit of the Nutrient Film Technique is the sheer volume of plants you can grow. You’re only limited by the size you’re growing them in. As well as that, it’s also going to help lower the nutrient consumption of your tomatoes and reduce salt build up too, as the water is always flowing.

One of the biggest problems with the Nutrient Film Technique is that plants nearest where the water begins to flow are going to end up getting more nutrients than the plants where the water exits. This means you could end up with some plants growing faster on one side.

If you don’t fancy the Nutrient Film Technique, you can also try the Deep Flow Technique, A Drip System and the Ebb-And-Flow Method.

How Do You Make Hydroponic Tomatoes Grow Faster

The key to helping hydroponic tomatoes grow as fast as possible is making sure that all of their needs are being met. If you’re not being vigilant then you may end up with a subpar harvest.

Here are a few of the main factors that will ensure your tomatoes grow as fast as possible.

One of the best things you can do if you want to start harvesting is buying saplings not seeds. The best part about saplings is that you’re already saving yourself about 2-3 weeks of time as the plant has already started growing.

However, if you are using saplings you need to be careful where you purchase them from. If you buy saplings that have been grown outdoors then you may end up spreading outdoor diseases amongst your whole crop.

So if you do plan on buying saplings make sure you buy some from a hydroponic store.

Next you need to make sure that your tomatoes are getting enough nutrients. And the best way to do this is to check the EC/PPM. Using a TDS Meter you should make sure that the EC of the water is between 2.0-5.0 or 1000-2500ppm.

As you can see, tomatoes require lots of nutrients to grow, and the amount of nutrients required will only increase they grow larger. So when you’re growing saplings it’s better to be closer to the lower end, and as they begin to grow start moving up until you reach the upper limit.

And remember, if you go to high then your tomato plants will end up suffering from nute burn which will slow down their growth.

When you grow your hydroponic tomatoes indoors you have complete control over the environment. This means it’s entirely possible to keep growing them all year round.

When you do this, you’re going to get a large crop that every so often which will help tide you over.

Make Sure They’re Getting Enough Light

You also need to make sure that your tomato plants are getting enough light. Opinions vary on how much light you should give your tomato plants but generally it’s believed 8-10 hours a day is a good average for your plants. Some people even recommend leaving the light on for up to 16 hours.

However, whatever you choose to do, just make sure that you’re giving your plants enough time without light too. This is the time when they’re going to transpire the most and it’s vital to their growth.

The best thing you can do is find out how much light your specific type of tomato needs as well as experimenting a little.

When your growing tomatoes you want the temperature to be between 60-90ºF (although ideally it should be between 58-79ºF).

When the temperature is too cold, you’ll notice that it takes your tomato plants a lot longer to grow, and in some cases they may not grow altogether. Likewise if the temperature is too hot, then your tomato plants aren’t going to be able to transpire properly. If they can’t transpire properly, then they could overheat which will also affect their growth.

That’s why it’s so important to make sure you’re consistently keeping the temperature perfect, and another reason why it’s great to grow hydroponic tomatoes indoors.

As well as having trouble absorbing nutrients when the pH is too high or low your tomatoes may also suffer from deficiencies and toxicities as well.

And lastly, make sure you’re buying disease free seeds. While it’s less likely that your tomato plants are going to suffer from diseases when they’re grown hydroponically, it’s not impossible.

Disease free seeds are one of the easiest ways to drastically reduce the risk. And if you don’t buy them you may end up losing your whole crop which will result in a much longer harvest time.

As you can see, when growing tomatoes hydroponically you can expect a harvest after about 60 days.

If you want to make sure you get them in as short amount of time as possible you should make sure you’re getting the pH, temperature, nutrients, and lighting perfect as well as growing them indoors and buying disease free seeds.

And if you liked this article make sure you check out the rest of the website! Otherwise have a great day!