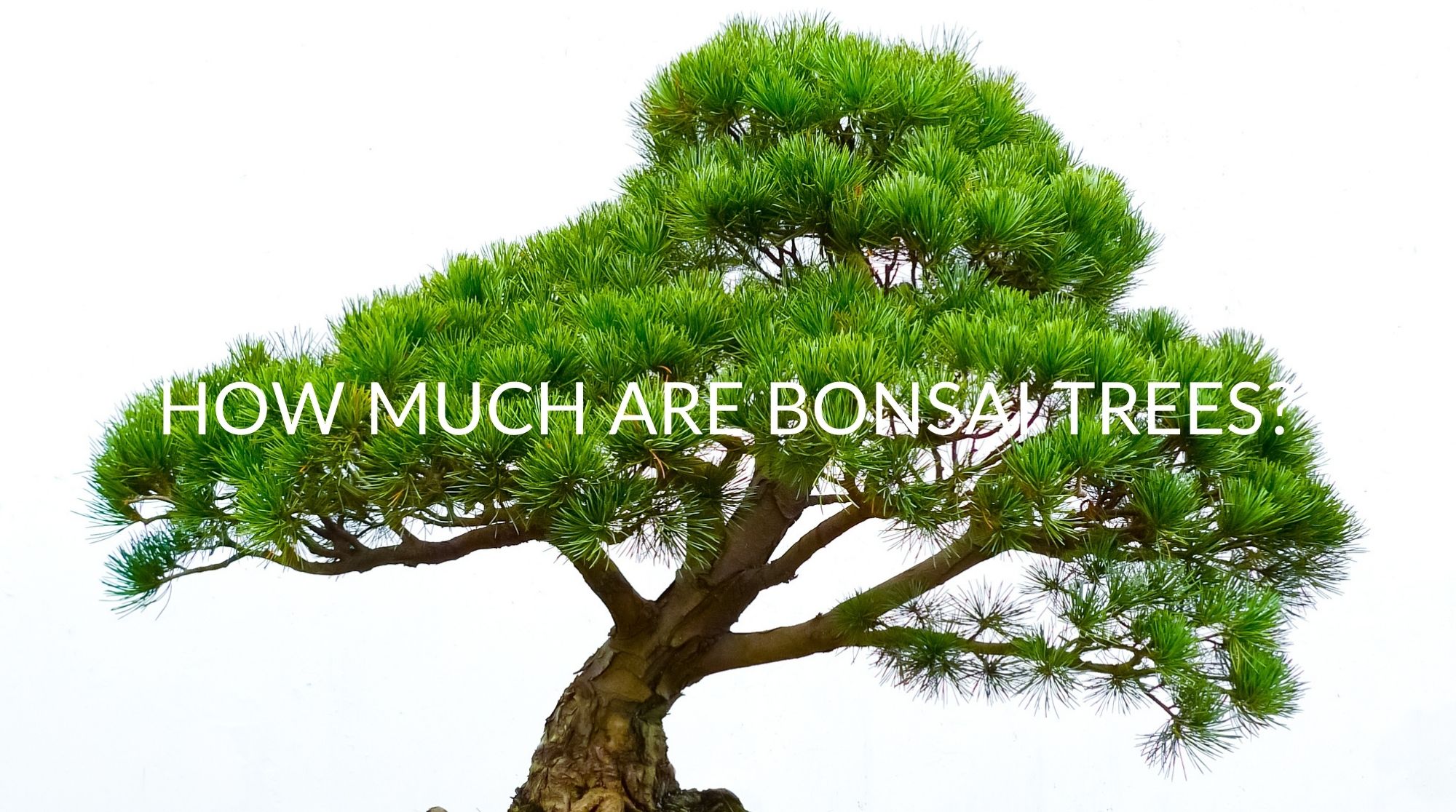 If there is one thing that most people know about bonsai trees, it’s is that they can sell for extremely high prices, but exactly how much are bonsai trees in general, and what affects the price tag of these miniature plants?

This article will go into detail about everything you need to know when it comes to bonsai trees and their value, including how much you can expect to pay for one of your own, what makes them more or less costly, and the true upper limit of how expensive a bonsai can be.

How Much Are Bonsai Trees?

Carefully cultivated bonsai trees can famously cost a lot of money to buy. However, you might be surprised to discover that you can find normal specimens at a very reasonable price, depending on the individual tree itself. There are many factors that influence how expensive a bonsai tree is, but getting your hands on one doesn’t have to break the bank.

Although prices will change depending on the country, location, and store you are purchasing from, you can usually find a cheap miniature bonsai for $20-$30. The most common varieties of bonsai can be found in garden centers all over the world, unlike the rarer, more expensive trees. Fully grown, mature bonsai trees are more expensive and will usually start at around $100, but they can sell for thousands.

You can think of bonsai trees a lot like works of art – you can certainly find something attractive to put in your house for a reasonable price, but really well-crafted and highly sought-after pieces can be incredibly valuable to the right buyers.

Many people are put off the idea of bonsai trees because they expect them all to cost an arm and a leg. The truth is, if you visit your local garden center or search around online, you could be bringing home a miniature bonsai for less than the price of a meal out. With that being said, most of the more beautiful specimens are certainly more expensive.

Why Are Bonsai Trees so Expensive?

Knowing that you can find miniature bonsais for such a small price tag, you might be wondering why many sell for astonishingly high prices. There are a lot of different reasons why bonsai trees can cost a lot of money, but it is mostly down to the expertise and labor involved in cultivating them.

Proper bonsai trees are expensive because:

They Take a Long Time to Grow

The main reason why it can cost a lot to purchase a proper bonsai tree is that there is a lot of time involved in growing them. Though they are small, the process of growing a bonsai is actually a very slow one, and it takes an average of 10-15 years for one of these trees to reach maturity.

Some bonsai trees can take up to 30 years before they are fully grown, and they can live for hundreds of years after that.

Not just anyone can grow a bonsai tree, and the care that goes into styling and maintaining them is a daily job. These are not plants that can be produced en masse in large greenhouses, and specialists need to spend a lot of time and effort on a proper bonsai. In terms of labor costs alone, growing a beautiful bonsai can be a very expensive task.

Besides the cost of labor, there are also additional costs in the specific tools and equipment that are required to maintain and care for a bonsai tree. There are different tools required for shaping, styling, and training bonsais, and they can all be pretty expensive to buy and properly maintain.

Some Species are Very Rare

Common tree species that are used to make bonsai trees can be quite cheap, but many of the more attractive specimens are much rarer and therefore much more expensive. Rare tree species are harder to find, and therefore it costs more to get hold of the seeds or cuttings that are required to grow one into a bonsai.

Many Have a Low Survival Rate

Growing a bonsai tree doesn’t just take a long time and a lot of care; there is also the risk that the tree won’t make it to maturity. Many of the more attractive and delicate bonsai trees have a very low survival rate which means that greater numbers need to be grown and cared for in order for some to reach maturity.

They Can Require Expensive Treatments

When bonsai trees get sick, it can cost a lot of money to treat them and ensure that they return to good health. You don’t often consider medical costs when it comes to plants, but part of the cost of the final tree reflects the effort that goes into keeping them healthy.

At the end of the day, many of the most expensive bonsai trees have such great value for artistic reasons more than practical ones. As with any art, the more beautiful and highly-regarded a particular specimen is, the more it can be sold for. Many bonsai trees also hold spiritual value, but these are rarely sold.

Which Bonsai Trees Are Expensive?

Most of the highly expensive bonsai trees on the market don’t gain their value from the type of tree that they are, but some species are more likely to have a high price tag than others. More often than not this is because they are more popular, rarer, or particularly challenging to grow and look after.

Some of the most expensive bonsai trees commonly found on the market include:

Generally considered to be the finest variety of juniper that are used for bonsai trees, the compact foliage of an Itoigawa Chinese Juniper makes them very appealing. Mature trees are often sold for up to $1000, and some of the most expensive bonsai trees in the world have been Itoigawa Junipers.

Both hardy and beautiful, the Japanese Black Pine bonsai has a striking appearance, with a rugged trunk and branches covered in richly colored green leaves. They are very popular but actually quite hard to find grown to maturity, often selling for more than $1000.

Another favorite for collectors, the Japanese white pine (also known as the “five-needle pine) is often viewed as the quintessential bonsai tree. They are hardy outdoor plants that can withstand cold weather, and they have beautiful soft needles. Fully mature white pine bonsai trees will often sell for $1000 or more.

Flowering bonsai trees often fetch higher prices than their leafy cousins. Chinzan Azaleas are particularly popular due to their intensely pink flowers, which bloom in late spring, and fully mature plants will often sell for over $2000.

Although you can find a lot of immature maple bonsai trees that are relatively cheap, many of the most expensive bonsai trees in the world have been well-developed Trident Maple bonsai. These are deciduous trees that need very careful pruning to maintain the right growth and leave size, and the most attractive examples can reach prices of up to $15,000.

What Determines the Cost of a Bonsai Tree?

While some species of bonsai tree are often more expensive than others, there are many alternative factors that determine how much an individual tree will cost. You will find that the value of each tree varies dramatically, even amongst those that might appear similar to the untrained eye.

The most important factors that determine the cost of a bonsai tree include:

The Species of Tree

Some species of bonsai tree are more difficult to grow or rarer to find, which will naturally increase how much they cost to buy. The type of tree, however, is often less important than how it has grown.

The Age of the Tree

In the eyes of collectors, the older and more mature a bonsai tree is, the better – and therefore the more you can expect to pay for them. This is partly because of the amount of time that has gone into growing them but mainly because of the way that aged and mature bonsai trees look in comparison to younger specimens.

The amount of cultivation, styling and care that has gone into growing any one particular bonsai will greatly affect how much it is worth. You will find that the vast majority of the more expensive bonsai trees on the market have been curated by a respected professional and maintained over a very long period of time.

It is surprisingly easy to grow a generic, young bonsai tree, but to cultivate one that suits the ideal aesthetic bonsai enthusiasts aspire towards is a challenging feat. Everything from the trunk width to the specific branch formation can affect how much a bonsai is worth to a collector.

Some bonsai trees are carefully shaped to fit a specific style and many of these will fetch a higher price. Root-Over-Rock style, Windswept style, and Raft style bonsais are much less common and generally more expensive as a result.

Where the Tree Comes From

Bonsai trees that are grown in Japan are usually the most expensive, with European trees being around average in price and Chinese trees generally being a bit cheaper.

What Is the Most Expensive Bonsai Tree?

There are some bonsai trees that hold a value that is truly astonishing. A few unique trees have sold for prices in the hundreds of thousands of dollars, and one famous tree fetched a price of more than a million dollars.

There have been two Juniper bonsai trees that are known to have sold for $350,000 and $180,000, but most of the other highly valuable bonsais tend to have been valued at closer to $100,000. Even in a very rarefied and precious market, over a million dollars for a tree is really remarkable.

Recap: How Much Are Bonsai Trees?

The exact value of a bonsai tree is usually very specific to the individual specimen, so it can be hard to define exactly what one is worth.

You can buy a miniature bonsai for $20-$30 from a garden center, but the average cost of a mature tree is closer to $100. With that being said, there are many trees that are rarer, more attractive, or more highly sought-after, which regularly sell for prices in the thousands of dollars.

There are many things that affect much a bonsai tree costs, but at the end of the day, the price tag is about as hard to determine as that of an original painting.