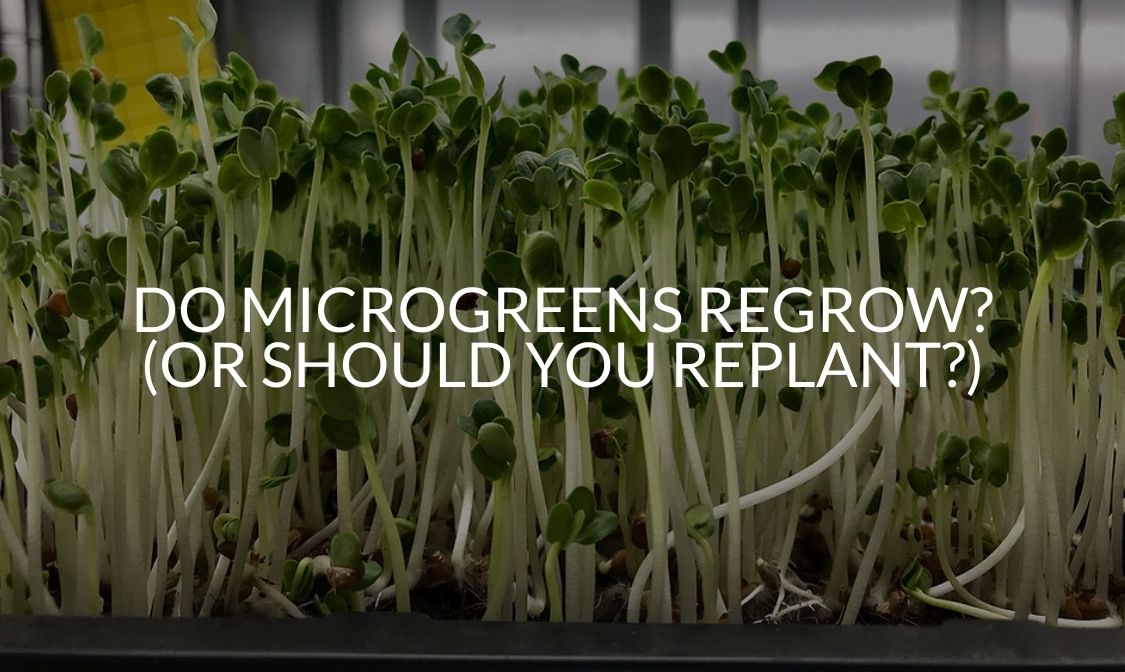 If you have grown microgreens, you know how rewarding it is to grow them and then eat them and know that you did it all by yourself.

Some types of microgreens will regrow after you cut them, but with other varieties your best bet is to dump out the roots and replant new greens. Since they tend to grow pretty quickly, you shouldn’t have to wait too long before you can harvest your fresh microgreens again.

Microgreens are a popular choice to grow because you can grow them in a small space, which makes them perfect for someone with a small home or lack of space.

Because they grow so fast, they can make a fun science experiment for children who are learning about growing plants.

They are also packed with health benefits such as polyphenols which can lower your risk of heart disease, not to mention full of vitamins and minerals.

Along with being healthy, microgreens are also really tasty and can add a spicy element to many dishes.

If you put the work into growing microgreens, you are probably wondering if you can regrow them after you cut them back and harvest them.

Some varieties will grow back, but most others won’t have much activity once you harvest them.

For the most part, once you cut back your greens they will not regrow and its best to just dump the whole tray and start again. If there are some healthy shoots that did not get cut back, the greens might regrow but would probably be very stunted and slow to grow.

Some varieties that regrow after cutting include:

Peas seem to be the easiest variety to regrow. If you are looking for a microgreen that you can regrow after harvesting, start with peas!

Other than these few varieties, most microgreens will not grow back after you cut them. If they do grow back, as mentioned above they will probably be stunted. Along with stunting and slow growth, any green that does grow after the first harvest will have a different taste.

If you are after a particular taste for your microgreens, make sure to get rid of the roots after you harvest and replant new seeds in your microgreen tray.

Microgreens tend to not regrow after cutting because when you cut them to harvest them, you do significant damage to them.

You can think of it like getting a cut on your skin. If you cut your finger with a knife, your body has to spend energy and resources to heal that cut.

You probably wouldn’t notice your body spending energy to heal that cut, but it is definitely happening.

The same thing can be compared to illness in humans – if you are sick and your body is trying to heal, you may feel like you have no energy because a lot of your energy is going to fight off the illness.

The same is true for microgreens – when you cut the microgreens you have basically given the plant a wound. It will then spend energy trying to heal that wound to protect itself, rather than spending lots of energy on trying to grow taller.

Rather than having your plant spend so much energy on trying to heal and then regrow, it is usually best to just scrap the roots and start fresh. This way you can ensure that you will have the best microgreens rather than ones that may not grow again.

Is It Worth It Trying To Regrow Microgreens?

In general, there is no real point in trying to regrow microgreens (except for a few varieties listed earlier), because they are likely to not grow. If they do decide to grow back, the result will probably be poor.

When you regrow microgreens, if they do decide to grow at all it will likely take just as long for them to reach full height as it would for you to just start from scratch.

The taste of the microgreens will also likely be impacted if you regrow them – they won’t have the same taste as a batch of greens that is on its first round of growing.

If you want to try to regrow microgreens just as a fun household experiment, then there is no harm in doing so. It could be fun to see how long they take to grow back, or if they grow back at all. So much of gardening and growing your own food is just experimentation, so if you really are interested to see if they grow back, go for it!

What to Do After You Harvest Your Microgreens:

Compost Or Spread It In Your Garden

After you harvest your microgreens, you can add the soil and roots to a compost heap, or even just spread it in your garden. Those roots will decompose and will help your soil to become fertile.

If you add the used soil and roots to a compost heap, you are basically investing in future soil as well. Eventually, you’ll be able to use that compost as the basis for your garden soil and even as soil for your microgreen trays.

If you really want to try to stretch your soil, you can try turning it over.

You will take your soil that has roots at the top and literally turn it over in the tray or container so that the roots are sitting at the bottom of the container. You can then try to sow your new seeds on the top of the soil and a new crop of microgreens will start to grow.

There are some risks associate with this like mould, since the soil could become too moist since it is already used. But this is definitely worth a shot if you want to try to reuse your soil – especially if you do not have a garden or a compost heap to take soil from.

If you are an apartment dweller and don’t have buckets or bags of soil stored anywhere, you may want to give this a try and see if turning over your soil works for you!

Harvesting microgreens does not mean that you have to eat them all in one sitting as soon as you cut them. Once you cut them, you can store them between damp paper towels and then sealed inside a plastic bag of container. They should keep for about a week.

You may also choose to just cut a portion of your microgreens every time you wish to eat them. Then, when you have finally cut back the whole tray, you can start a new batch.

If you are really adamant about regrowing your microgreens, try out a few varieties of peas and see how they do when you regrow them. It is also worth experimenting when it comes to growing greens!