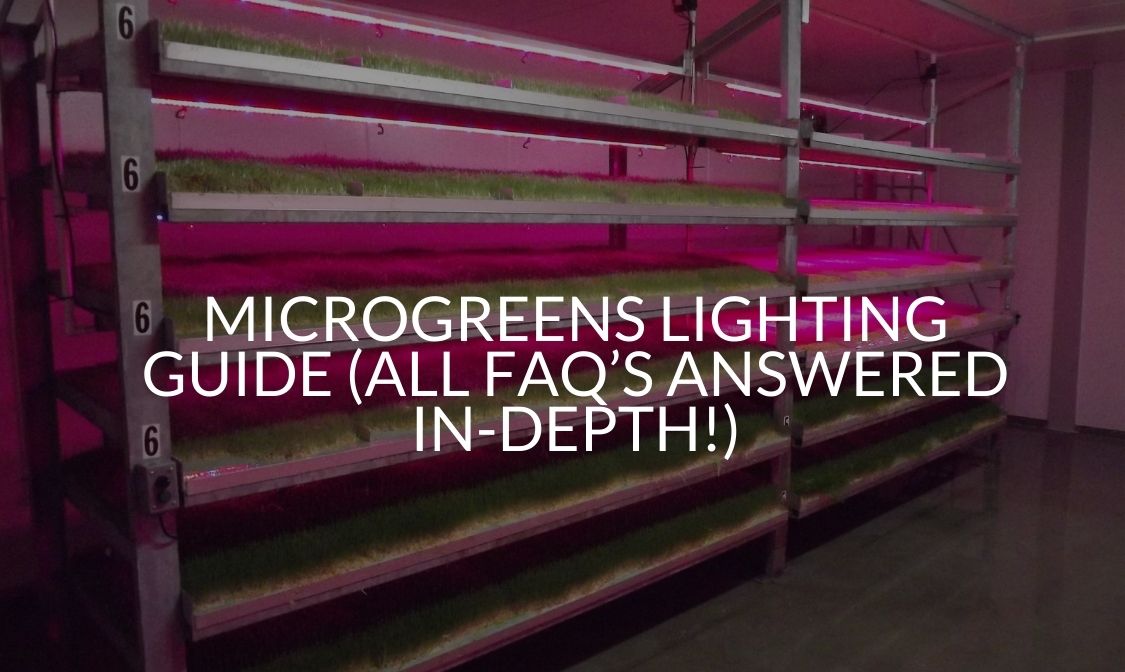 Trying to wrap your head around microgreen lighting can be extremely confusing. When you’re first starting out you’ll read a whole bunch of conflicting information. Some people recommend artificial light, others swear you don’t even need that. And that’s before you even start thinking about lumens, color temperature and wattage!

If this sounds confusing to you then worry no more. After reading this article, you’ll know exactly what’s best for your microgreens!

Before answering any questions, the most basic one is whether or not microgreens need light in the first place.

The answer is yes. Microgreens do need light to grow. Just like all plants, if your microgreens aren’t getting any light, they’re not going to grow properly! In fact, this is the reason microgreens often go yellow.

But Do Microgreens Need Light To Germinate?

The only time microgreens should receive no light is when they’re germinating. During germination, complete darkness forces the microgreens to grow to find a light source. Without this force, your microgreens may not grow as well.

Some people recommend blackout domes, however, I personally wouldn’t. When you use a blackout dome, you increase the chance of mould because there’s no air movements, and no water can escape.

On top of this, if you keep your microgreens in the dark for longer than they need to be then you’ll end up with a lot of stem and not as much leaf.

So, How Many Hours Of Light Do Microgreens Need?

If constant light for microgreens isn’t good, how much light do they actually need? As a rule of thumb, anywhere between 4-8 hours is good enough for microgreens. So aiming to give them 6 hours a day of light is going to be perfect!

Fortunately, microgreens are great growers, and even leaving them on a windowsill is a great way for them to get enough light!

When Should You Put Your Microgreens Under Light?

Generally speaking, you don’t want to wait more than 2-3 days before you expose your microgreens to light. However, of course, while this is the general rule, there are always going to be exceptions to this.

So what happens if you leave it too late or too early?

When you leave exposure to light too late, your microgreens will run out of energy to grow. This will cause them to become limp and fall over. On the other hand, if you give them light too early, they’ll develop their true leaves, before the stem has grown long enough, so you’ll end up with a smaller harvest.

When you get the light exposure just right, you’ll maximize the length of the stem, while minimizing the chances of them peaking too early.

What’s The Best Colors Of The Light Spectrum For Microgreens?

The best colors of the light spectrum for microgreens are red and blue. These are the colors that promote photosynthesis the most. However, if you’re looking for increase leaf thickness and number of chloroplasts (which also help photosynthesis) then you should favor blue light a little bit more than red light.

Here are the different colors of the light spectrum and what each color do.

What Kind Of Light Do Microgreens Need?

The best lights for microgreens are lights with a color temperature between 4000-6500k.

But what does this mean?

The color temperature is the warmth of light that is emitting from your bulb and it’s measured in kelvins. 2000 – 3000k is a warm white, where as 3000 – 4500k will produce a cool white hue. From 4500-6500k you’re producing a day light color. Which is more blue than white (which is great for microgreens!

Do You Need A Grow Light For Microgreens?

If you’re still not sure which grow lights to purchase though, these ones will do the job!

How Far Should You Place Your Lights From Your Microgreens?

For most microgreens about 22cm away is going to give the best growth, however, you should experiment to find out which works best for you. What’s more important that how far away they are is how evenly spaced they are.

If your lights aren’t evenly spaced then you may find that some of your microgreens become more leggy than others. Especially microgreens that tend to take longer to grow.

How Many Lumens Are Best For Microgreens?

Believe it or not, lumens aren’t the best measurement of light when it comes to growing microgreens. Lumens measure how bright a light is to the human eye, now the intensity or strength of the light.

It’s much better to use kelvins as the decider for which light you should buy or even watts. Watts are an indicator of how much energy your lights are putting out, which will affect your microgreens growth.

How Many Watts For Microgreens?

Because your microgreens aren’t going to require as much light as full-grown plants, 20 watts per square foot is going to be more than enough to help them grow! This amount of light will give you fantastic growth. And it’s also relatively cheap to buy lights with this wattage!

Now you know everything there is to know about the lighting your microgreens need. WHen it comes to lighting for your microgreens don’t overthink it too much! Remember, just sitting on the windowsill is often more than enouhg ight for them!

If you liked this article, make sure to check out the rest of the website! Otherwise have a great day!