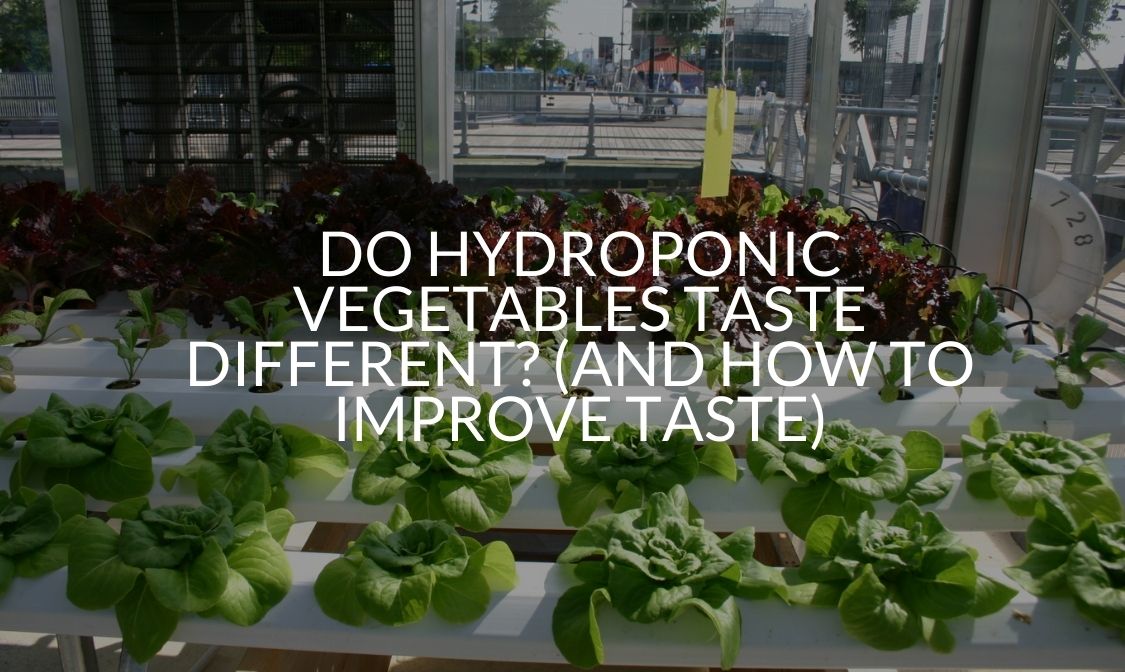 Hydroponic gardening—that is, growing plants without soil—can be a great way to grow your own fruits, vegetables, and herbs. You may be wondering where the term “hydroponic” comes from. It derives from Greek: “hydro,” meaning “water,” and “ponos,” meaning “working.”

This system of growing is actually an ancient practice, as both the Egyptian and Aztec civilizations grew with this method. You might also be wondering what the appeal of hydroponics is? Well, for one (and the focus of this article), is taste.

Many people believe that hydroponic vegetables do in fact taste different: fresher and more flavorful. This article will cover a wide variety of aspects concerning hydroponically grown vegetables and their taste.

Hydroponics has exploded in popularity as they are a more sustainable way of growing vegetables and herbs than conventional gardening or farming, thanks to the fact that they help save water, one of our most precious resources.

Many people wonder, however, if there are other, let’s say, more personal benefits to growing hydroponically. Well, the short answer is a resounding “Yes!” This is because hydroponic growing can potentially improve both the taste and overall quality of produce.

This is, however, a somewhat complicated and controversial subject, so I’ll expand on the argument below.

Some people argue that hydroponic growing simply can’t compete with soil-based growing because of all the natural minerals that soil contains. While it is undeniable that a plant grown with optimal soil will likely taste great, oftentimes plants are grown in weak or unsuitable soils that result in mediocre or even bad taste.

On the other hand, hydroponics permits a much greater level of “micromanagement,” and hydroponics growers can experiment widely with the proper materials to add to the grow environment of the plant or plants.

Studies have been done to examine whether growing via soil or hydroponics tastes objectively better, through the use of flavor/taste measurements in plants. Overall, though, they show that it can go either way.

This is because no matter which growing environment, plants can receive nutrients on an ionic level, with their root systems absorbing them and thus affecting the taste (and sometimes even the nutritional value as well!).

What Can Cause A Difference In Flavor?

There are a ton of factors that can produce differences in flavor. As mentioned, hydroponics permits greater control over the growing environment. In essence, hydroponics growers reign over a synthetic environment, most often indoors.

With this controlled environment, hydroponics growers must manage sun/light exposure, water quality, nutrient type, bacteria/fungi, and individual plant genetics. Each of these plays a role in the overall flavor of the plant.

How Can You Improve The Flavor Of Your Plants?

There are many ways that the flavor of plants can be improved under the hydroponics system. Although unnatural methods such as genetic modification and chemical use (such as growth enhancers) are often used in commercial operations, they tend to result in less flavor. As such, we will mostly cover more natural ways of boosting flavor.

We currently lack lights that can perfectly replicate the sun’s UV rays. As such, hydroponics growers have both a disadvantage and an advantage when it comes to sun exposure.

Hydroponics growers can experience power outages, so that is one thing to keep in mind. Overall, however, if they have set up an efficient system that produces healthy plants they don’t really need to worry about dramatic effects on their flavor from the unnatural lighting.

While water quality might seem especially important for hydroponics, as this is the primary growing medium, water quality is essential for any kind of growing.

Some water sources may contain higher quantities of sodium and chloride, which can be harmful to plants. The pH level is another area of concern, but this can be tested with the help of a pH kit.

If you find that you are having trouble growing plants, particularly when they are at the seedling stage, it may be worth checking your water’s pH. Ensuring that your water quality is appropriate for your plants will result in healthier, more flavorful plants.

It is crucial to understand the role of nutrients when growing plants. Because hydroponics doesn’t have soil acting as a buffer, it can be in some ways easier and sometimes harder to get the desired results when introducing nutrients.

The nutrients have the advantage of having direct access to the plants’ root systems, but if too much is added at once, it can actually undermine plant growth.

Worst of all, the wrong nutrients will give your plants an off taste, which we obviously want to avoid.

Soil has an advantage when it comes to the microbiology of growing plants, due to the fact that healthy, appropriate soil contains both beneficial bacteria as well as fungi.

For hydroponics, growers need to add these in to achieve a more complex microbial environment, even if they will still lack the overall microbial complexity of a soil-based environment.

While hydroponics growers may be able to improve flavors in all manner of plant varieties, the role of plant genetics should not be discounted. Quite simply, it will be easier to achieve great flavor with plants whose genetics are pre-disposed to desirable taste.

If the taste is the grower’s main priority, then a plant variety known for strong flavor and aromatics should naturally be the first choice. Taking care of the previous aspects, along with good genetics, will make for incredibly flavorful (and nutritious!) plants.

Another factor to take into account is root density. Allowing ample room and the proper environment for roots can be an underrated factor when it comes to flavor.

Since hydroponics uses confined spaces, this can limit root growth, not so unlike what can happen with potted plants (as opposed to growing in garden beds, where the roots can spread to their little hearts’ desires).

While hydroponic plants don’t require roots for a structural reason, as with soil-grown plants, they do serve the important role of transferring nutrients up to the plant parts above the surface.

One downside of hydroponics growing is often growers focus too much above the surface at the expense of overall flavor, because the nutrients have been pushed away from the roots. Without soil as a buffer to their nutrient intake, roots in hydroponics will tend to absorb as much as possible.

All in all, hydroponics growers must stay diligent in their management of nutrients in order to maximize flavor and nutritional value.

It seems counterintuitive, but some plants actually grow best when faced with stressful growing circumstances. For example, kale grown conventionally in a field will often taste better following a frost. Another example is rosemary that is grown in hot and dry climates as it originally did will showcase bolder flavor and aroma.

One issue with hydroponics growing is that, in our attempt to cultivate and micromanage the optimal growing conditions for each plant, we might lose out on the “stress” factor. Some plants simply need some level of stress to produce the best possible flavor profiles.

So, as a hydroponics grower, you can experiment with introducing stressors to boost flavor, for example:

Why Is Hydroponics Better For Improving Flavor?

As amply shown above, many consider hydroponics as better for improving flavor simply because hydroponics allows for an incredible amount of micromanagement.

Unfortunately, it’s far too subjective of a question with too many factors to come to a conclusive answer. Quite simply, both methods can produce incredible fruits, vegetables, and herbs.

That said, the control over the growing environment with hydroponics should not be discounted, and hydroponics growers can definitely experiment more directly with their plants to try and improve flavor and nutritional profiles.

Hydroponics Benefits And Starting Your Own

Ultimately, most people would be hard-pressed to tell whether or not a given fruit or vegetable comes from a hydroponic or conventional environment.

As stated, however, hydroponics allows for much greater control in terms of growth factors and also allows for experimentation in terms of flavors and aromatics.

All in all, hydroponics offer a great, environmentally-friendly way of growing fantastic produce right in your own home. LED technology is also getting cheaper and better, which allows for more people to get into hydroponics.

With a rising population and water and land as scarce resources, we have to reassess our food growing methods, and growing from home can make just about anyone a food producer all year long.

If you’re interested in starting your own hydroponics, here are some good starter plants to try: