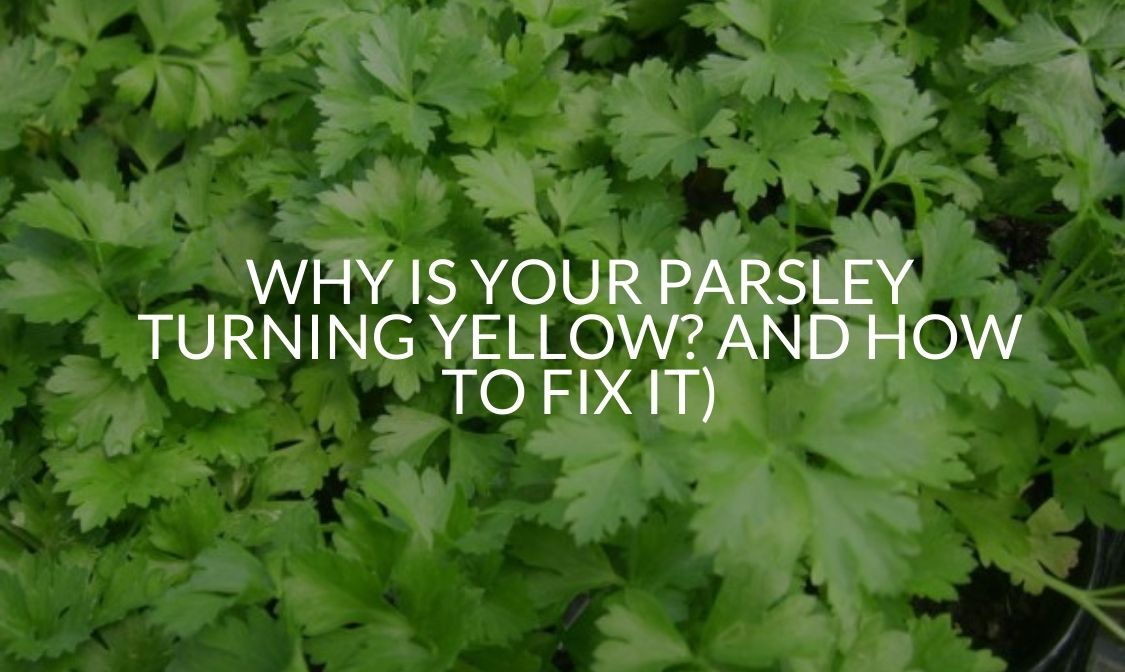 Parsley is a delicious herb native to the Mediterranean that’s used in countless styles of cooking across the world. Unfortunately, it’s also extremely delicate and will wilt and turn yellow with time if not given the proper care. While this is more common with parsley that’s been cut from the plant to use in cooking, it can also happen to full plants as well.

The most common causes for parsley to turn yellow are neglect and drought, though a bug infestation could also be a likely cause. Keep reading to learn all of the reasons that your parsley is turning yellow – on the plant or off.

Why Your Potted (or Garden) Parsley Plant is Turning Yellow

As with all plants in your garden, it’s important to pay attention to your parsley. It’s a rather delicate plant native to the Mediterranean, primarily in Italy and France. This means that it’s used to rather gentle conditions without major swings in temperature or hydration. So if you’re in an area that’s consistently in extreme heat or cold, you’re going to have to work harder to keep the plant alive.

The most common cause of yellowed parsley is improper watering. If it’s getting too much or too little water, not only can this outright kill the plant, but it can bring other issues with it. Other common causes of parsley turning yellow are root rot, fungal infections, and spider mite or aphid infestations (which are all made worse with improper water and soil).

Here’s how to spot and solve these problems.

A very common cause for yellowed parsley is dehydration – that is, it’s not receiving enough water to stay alive. Ironically enough, another common cause is the exact opposite problem – it’s getting too much water. If you’ve ever tried to keep parsley alive after cutting it from the plant, you likely know to keep it in water – but when it’s on the plant, things are different.

To grow properly, parsley needs to be in a well-hydrated, nutrient-dense, and properly draining environment. This means that if you have it in a pot without drainage holes, or you’re overwatering it, it’s more likely to die and turn yellow.

Additionally, if your area is in a drought (as many are right now), you’re going to need to plan for this and water more often than you might normally due to the lack of rain.

To spot an overwatered plant, simply look at the dirt around it and stick your finger in. It should be damp, but not muddy – if mud or dirt is pulling off in large bunches on your finger, you’re giving it too much water. And if the dirt is dry, that’s a sign you need to water a bit more often.

How to Save an Overwatered (or Underwatered) Plant

If you’ve noticed that your soil is too dry or wet, here’s how to save your plant – assuming you caught the issue fast enough. The first thing to do is to consider replanting your parsley into a new (properly sized) pot with some compost or fertilizer.

Often, if the dirt you used is too sandy or just not nutrient-dense enough, this can compound the problem, so replanting can solve multiple potential problems at once.

It’s also important to ensure your pot is big enough for the plant. Too small and it runs the risk of essentially baking the plant in the container when in sunlight. Too big of a container is less of an issue, but it can still affect the plant.

If you’re not sure how to determine the size you need, ask around at a local plant nursery or home and garden store. It’s always better to ask for help than to make mistakes that could be solved with a simple question or two.

Normally, you’ll need to water your parsley plant every three days or so. If you’re worried it’s not getting enough water (especially in a drought) then it might be necessary to water it every day and keep an eye on it, just to be safe.

A common side effect of overwatered plants is root rot and fungal infections of the plant. This is because oversaturated soil provides a great environment for fungus and bacteria to grow and attack your plant’s root system. If you’ve already repotted your plant into new, better soil, and changed your watering habits, this could be a cause for your parsley remaining yellow.

To spot root rot or similar fungal infections, look at the roots. If they’re black or dark brown (more than normal) and are soft or spongey to the touch – that’s a sign that your plant is infected. The two most common forms that root rot take are:

How to Solve Root Rot & Other Fungal Infections

Again, replanting is key. But before doing this, you’ll need fungicide and sterilized (alcohol works) shears. Now that you’ve got those things, follow these steps:

A Bug’s Life (and Their Accompanying Problems)

The last common causes of a yellowing parsley plant are bugs. Anyone who’s been gardening for a while shouldn’t be surprised by the fact that aphids and other insects can cause a great deal of damage to your plants, so here’s how to spot and deal with them.

These guys are super common in most gardens. While they’re generally kept in check by other insects, they can cause issues if there’s an overabundance of them in your garden. The nice thing is that they’re pretty easy to manage!

To take care of aphids, simply remove them by hand. For the uninitiated, they’re the little tiny green bugs that crawl all over your garden. If there’s a lot of them, then simply prune the parts of the plant that they’re paying the most attention to and keep an eye on the plant. Repeat this process as needed and you’ll be set.

These little guys are nearly impossible to spot with the naked eye (especially if your vision is as bad as mine), but the damage they do isn’t. If you’re seeing small yellow dots on your parsley plant, that’s likely a sign of spider mites.

As you can’t simply pull them off by hand, the best way to deal with them is to use a gentle insecticide and keep them in a healthy environment. Spider mites thrive on plants that are underwatered, in too little sunlight, or are in poor soil – so replant and put your parsley in the sun (with a little shade) if this is a common problem in your garden.

These little suckers are incredibly annoying. The adults look like small mosquitos that don’t fly very well and emerge from plant soil – especially when watering the plant. However, it’s the larvae that you need to worry about. To deal with these little guys, there are a few options:

Parsley thrives in the sun with a little bit of shade. And, as discussed above, it needs nutrient-dense, properly watered soil. So pay attention to the dirt you’re using to plant, as well as the environment in which you live.

If you’re in an extremely hot environment, leaving the plant in the sun all day will kill it – so look for a place that’s got shade for part of (but not all) the day. And if the dirt you’re using is overly sandy or just plain bad – consider using compost.

While I’ve recommended that you use fertilizer, it’s important to know that this isn’t always necessary. If you don’t have access to compost, it’s a good second option, but you also don’t want to provide too much nitrogen (a common part of fertilizer) as this can increase the risk of an aphid infestation.

If you notice your plant drooping, but you’re positive it’s getting exactly enough water and sun, this is a sign that you’ve got too much nitrogen in the soil. That makes it time to replant or fix your soil.

How to Preserve Parsley

Once you’ve cut it from the plant, parsley tends to have a short lifespan (less than a week in optimal conditions). And because, like many aromatics, it will lose the oils inside once the leaves are bruised or cut, it’s better to cut it as needed, rather than in bulk.

If you plan to use a lot of parsley in a short time period, consider covering it with plastic in a container with a shallow layer of water at the bottom. Keep it in your refrigerator and it should stay perky for at least 3-4 days. You can alternatively use dampened paper towels and no water in the container for a similar effect.

If, however, you plan to store the parsley for a long time (perhaps it’s the end of its season), there are other options to still have fresh parsley.

You can roll the parsley leaves into a chiffonade-style roll after rinsing and drying them and then plastic wrap and freeze them. They will stay good for several months, though they won’t be nearly as perky as fresh parsley sprigs would have been.

If your parsley has turned yellow and you still desperately want to eat it, you can. Just be warned – it will have lost most of its flavor and luster. It’s generally best to remove yellowed leaves and use them in compost (assuming you know there’s not a fungal infection).

If you’ve had parsley in your fridge for more than a week, it’s also likely that it will have turned yellow – this just means that it’s dying. After all, they’re leaves that are removed from their plant. If you make a habit of cutting only what you need, you’ll have prettier and tastier parsley than if you’d just bought it dry or already cut from the supermarket.

If you notice yellowed parsley, there are a few things to look for. Proper hydration (not too much or too little), healthy soil, and good amounts of sunlight will help your plant thrive. If these changes don’t help, check for aphids, spider mites, root rot, or other fungal infections and consider replanting in a larger, properly irrigated pot.

And when you’re ready to eat the parsley, try to cut it only as needed. This will provide a much better tasting and looking herb than cutting in bulk and trying to store it long-term.